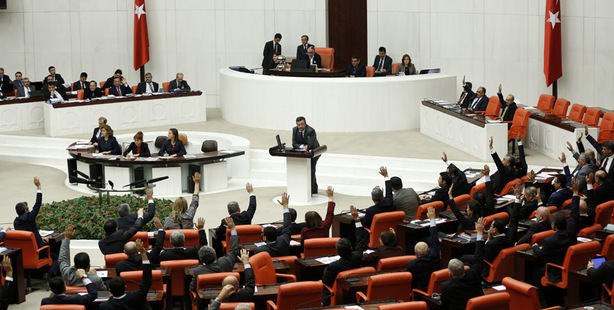 The judicial reform bill has passed this morning in the Turkish Grand National Assembly. The articles 38 and 41 have been removed from the proposal consisting of 46 articles in total. The proposal was approved with 210 votes for, 28 votes against and has been legalized.

The legalized new structure of the Supreme Council of Judges and Prosecutors (HSYK), which will look more like EU judicial institutions, will allow for tighter government control of the HSYK and empower the minister of justice. The minister will be able to appoint officials to commissions overseeing the functioning of courts, and also decide on the HSYK's agenda.

"Reform bill does not violate the constitution"

In light of changes to the government's judicial reform bill at the Constitutional Commission and the General Assembly, some jurists stated that the proposed changes would not represent a violation of the Turkish Constitution. Osman Can, a professor of constitutional law and former Constitutional Court rapporteur, concurs with this position. "From my point of view, the amended HSYK bill does not violate the Constitution, it rather positively meets the criteria set forth by the Venice Commission," Prof. Can stated. "There is a parallel organization in Turkey that uses laws as a smokescreen. Under these circumstances, lawmakers should take necessary measures against this organization," he added.

While Can pointed out that certain provisional articles may be legitimately criticized, the current debate demonstrates that Turkey finds itself at a point that strongly resembles the legal reforms of Spain and Austria in the 1970s and the 1980s where peculiar political circumstances rendered provisional arrangements necessary.