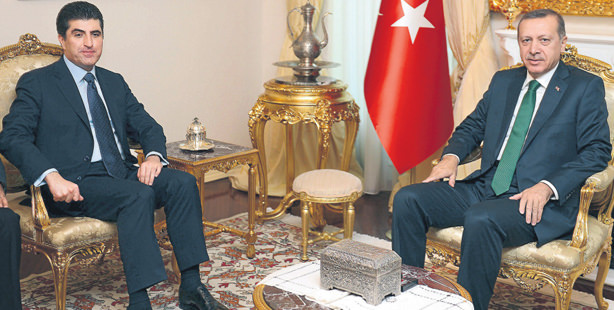 Prime Minister Erdoğan meets with KRG Prime Minister to discuss the reconciliation process and the details of the deal that allows oil transfer to Turkey.

There was no press conference following the closed-door meeting, however, regional developments, an oil pipeline and the reconciliation process of the "Kurdish issue" headlined Erdoğan and Barzani's meeting, informed a source from the Prime Ministry.

In Jan. 2014, crude oil from the KRG region began to flow through a new pipeline between the KRG and Turkey. Tensions between the KRG and Iraqi central government over the budget allocation of oil exports to Turkey recently halted the first pipelined Kurdish crude oil exports. Last month, Iraqi Prime Minister Nouri al-Maliki threatened to cut central government funding for the KRG if the Kurds pursued a drive to pipe oil exports to Turkey without approval from Baghdad.
Amidst tensions between Erbil and Baghdad, Turkish authorities maintained their calm and expected both sides to reach another agreement. Talks between Erbil and Baghdad are still continuing, however, sources claim progress is made with the sides close to reaching a deal over the oil dispute. Iraqi parliament spokesman Osama al-Nujaifi, also hinted that an agreement is near, during his recent visit to Ankara. "I guess the parties hold similar views. The oil agreement has not yet been finalized but there are predictions. I am also trying to help. It will be right to have a decision made by Iraq. I believe that such a decision arising from an agreement between Iraqi Kurdistan and Baghdad will be appropriate. Turkish officials also conveyed that they will not impede if an agreement between the KRG and Baghdad is struck, and said they would support it," said al-Nujaifi in Ankara on Feb. 6. Mehmet Sepil, president of Genel Energy, which operates in the region, shared similar sentiments in his recent interviews to journalists: "The issues that caused an impasse have been identified. There has been quite a bit of progress."
Turkey's continuing reconciliation process on the "Kurdish issue" was among the hot topics discussed. The reconciliation process was previously welcomed by the KRG officials. Last November, KRG President Massoud Barzani paid a historical visit to Turkey's mainly Kurdish south-eastern city of Diyarbakir, as a symbolic gesture, signifying the unity of Turks and Kurds.
Following his visit to Turkey, Barzani will head off to Baghdad on Sunday, Feb. 16 to reach a solution regarding the budget crisis and oil exports with the al-Maliki government.