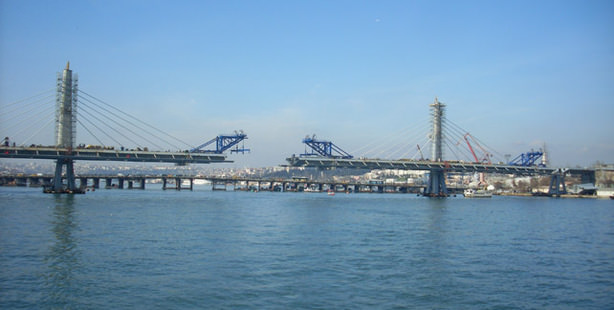 A metro bridge on Istanbul’s Haliç (Golden Horn) was opened on Saturday, marking the latest step in a plan to expand railway transportation in Turkey’s largest city

Officially named Haliç Metro Bridge, the cable-stayed structure was opened on Saturday in a ceremony attended by Turkish Prime Minister Recep Tayyip Erdoğan. The new bridge and expanded rail lines, completed in five years at a cost of 671 million dollars, is 3.5 km long in total.

The new line connects the Sarıyer district in the north of Istanbul's European side to Yenikapı, a major transport hub in the south near a ferry port and Marmaray, an underwater railway tunnel connecting Asian and European sides of Istanbul. The Haliç Metro Bridge will significantly cut travel times, enabling the route to transport 70,000 passengers per hour and allowing passengers travelling from Sarıyer to travel to as far as Kartal in the far east of the Asian side by only changing at Marmaray or onto a bus.

Since the AK Party came to power in 2002, Turkey's railways have expanded and undergone major renovations, including the construction of high-speed trains offering faster travel between cities. Istanbul in particular, in terms of its railway network, saw rapid growth with the total length of rail lines in the city reaching to 141 kilometers in just 12 years. The total length of Istanbul's subway network will reach 420 kilometers by 2019.

Construction of the Haliç Metro Bridge and extended rail lines was previously delayed following the discovery of artifacts along the route. In a speech at the opening ceremony, Prime Minister Erdoğan said the government spent an additional 77 million Turkish Lira ($53.3 million) to protect cultural heritage near construction sites, where more than 50,000 artifacts were found. Along with artifacts, 23 ancient vessels were discovered but perhaps most importantly, several archeological finds showed history of settlement in Istanbul dating back to Neolithic Age, 8,500 years ago, earlier than previously thought.

High-speed trains have also been constructed between the capital Ankara and Istanbul and Konya in central Turkey. Along with domestic railways, Turkey has expanded its cross-border railway networks with a new line connecting the eastern Turkish province of Kars to Georgia's Tbilisi and Batumi. According to projections by Turkey's Ministry of Transportation, 10,000 kilometers of new railway lines will be completed by 2023 and 4,000 kilometers of the lines will be allocated for high-speed trains.