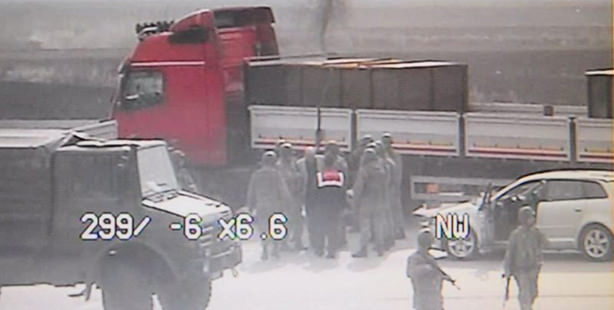 An investigation into a raid on trucks belonging to the Turkish National Intelligence Agency (MİT) on Jan. 1 and Jan. 19 in the city of Adana has taken a new turn.

Investigators from the Interior Ministry and Gendarmerie General Command sent to the region to carry out the probe initially interrogated the Regional Gendarmerie Commander and a number of other officers. According to their statements, before the interrogations began, Celepoğlu gave orders to the Regiment Commander and two other military officials not to reveal his name.

The investigation was prompted by two separate raids launched by Turkey's Gendarmerie, a branch of Turkey's armed forces, on an aid delivery destined for Syria. While it was claimed the shipment was carrying weapons to Syria, the allegation was denied by Turkish intelligence and top officials.

According to the Interior Ministry report, the tip off for the Jan. 1 raid was made from Ankara's Çukurambar district. Under normal circumstances, the call made to "Alo 156 Jandarma", the gendarmerie's hot line, should have directed the call to the closest gendarmerie center.
However, investigation of the phone records show that the call was diverted to and answered from Adana.

Images of the raids were leaked to the press showing gendarmerie commanders detaining MİT officers.
"This is a deliberate operation; not focusing on what was actually in the trucks. It was aimed at manipulating the perception of the MİT and discrediting the AK Party government," said the former chief of Police Intelligence Bureau, Bülent Orakoğlu.

The Interior Ministry report also said that journalists from the Doğan News Agency (DHA) were tipped off by a sergeant regarding the operation at 11:28 a.m., while the actual raid took place at 12:01 p.m. DHA released the initial images within the first half hour. The governor of Adana was notified of the operation by regiment commander Çokay at 12:40. When asked about the delay, Çokay noted that he wanted to obtain all relevant details. However, the Internal Code of Conduct of the gendarmerie stipulates that a raid can only be organized upon approval of the governor's office.

Turkish Interior Minister, Efkan Ala, slammed the gendermarie based on the images of raids published by Sabah, labeling the whole operation as "treason". Ala further noted that they were aimed at depicting Turkey as an al-Qaeda supporter.

The probe by the Interior Ministry revealed that the operation was aimed at labeling Turkey as a "state sponsoring terrorism", around the time of Turkish Prime Minister Recep Tayyip Erdoğan's visit to Brussels to advance Turkey's EU accession process.