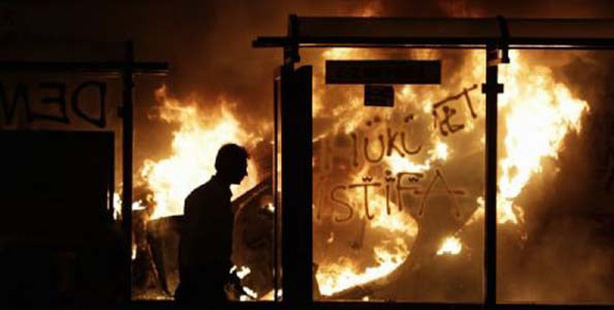 Recent information on the Gezi Park protests and the Jan. 19 raid on Turkish intelligence trucks reveal eye-opening parallels between the May 2013 protests and the operations initiated on Dec. 17

The root of the Dec. 17 operation extends to the Gezi Park protests, said Prime Minister Recep Tayyip Erdoğan, raising serious questions regarding those behind the protests and the operation. At the groundbreaking ceremony of a grand city hospital in Istanbul, Erdoğan also commented about the newly released footage of the gendarmerie's unexpected raid on the National Intelligence Agency (MİT) trucks in Adana on Jan. 19, 2014, alluding on potential connections between the two incidents and the Gülen Movement.

Recent calls of warning to the Interior Ministry regarding Gezi Park protests prompted the government to reinvestigate the incident. It was discovered that a group of police officers were intentionally used to amplify the scope and reach of the mass demonstration. Despite orders to police officers with regards to being more lenient towards protestors, orders were not obeyed. While intelligence services and police were expected to exchange information, it never happened. Although efforts of the Revolutionary People's Liberation Party (DHKP-C) militants to create a chaotic atmosphere were known, the allegedly Gülenist police chiefs did not intervene, endangering the secure flow of intelligence.

The police officer, who tear-gassed the "woman in red," one of the most prominent symbols of the protests was also unidentified, raising questions about potential ties with the Gülen Movement. Following investigations, the Interior Ministry will be preparing a report to submit to the government. It was reported that nobody recognized or identified the aforementioned officer and that such radical response towards a passive protestor was not in line with the educational and intervention ethics of riot police.

Another significant controversy surrounding the Gezi Park incident was the way police officers were torn between double-sided attacks and the constant psychological pressure. Policemen from all corners of the country came to Gezi Park, unable to meet their everyday needs, slept on concrete floors due to the lack of proper sheltering, creating a jetlag impact debilitating them. This would numb them, whereby they would submit to orders without questioning and create a chaotic environment. There were orders to "attack without a certain target." A number of officers objected to take action without official orders in writing or via police radio. Those who obeyed the order to attack without discrimination were condemned by police chiefs.

Similarly, it is alleged that the Gülenist attorney organized the Jan. 19 operation in Adana and assaulted Turkey's intelligence agents. Erdoğan referred to this as a betrayal to one's own state, its institutions and the people of Turkey. "How dare you attack the MİT? The citizens of this nation will not forgive this. They will all be held accountable for this betrayal and acts of infiltration, and [Fethullah Gülen] the leader of the illegal network will pay for all," Erdoğan remarked. The footage created uproar as MİT's trucks were stopped and raided by gendarmerie commandoes without notice to Adana's governor Hüseyin Vali Coş while intelligence agents were handled in a degrading manner.

The Gezi Park protests surfaced on May 27, 2013 as a reaction to the planned pedestrianization of Taksim Square and reached its peak on June 1 as an anti-government street movement, shortly after a group of policemen sprayed tear gas on a tent containing protestors. According to a Gezi report by the Foundation for Political, Economic and Social Research (SETA), 49.1 percent of demonstrators joined the protests after facing police brutality. Prior to this stage, the protest was relatively small in scale and evolved around protecting the trees and environment in Gezi Park, but the tear gas provoked many from the liberal left to join the cause. The police chiefs responsible of giving the orders to tear-gas and spray water on the activists remain unidentified. However, current findings indicate that the Gülen Movement may be involved in the case. The protests started as an allegedly environmental reaction, but took a brutal turn leading up to violent clashes and vandalism, thought to be a conspiracy of certain power groups.