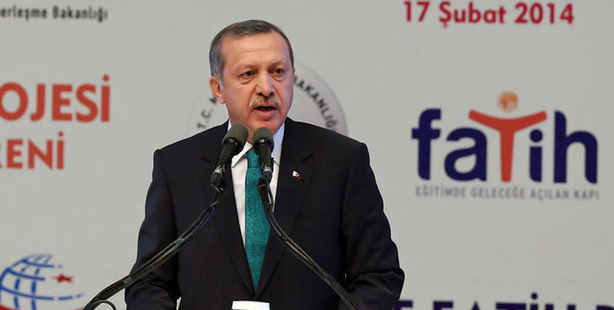 Yesterday, the Turkish Ministry of Education launched the FATİH project with the delivery of electronic tablets to ninth grade students. The tablet initiative comes amid government efforts to improve the level of education in state schools

With a ceremony attended by Prime Minister Recep Tayyip Erdoğan in Ankara, officials began the delivery of electronic tablets to 575,000 ninth grade students and 100,000 teachers. In the first stage of the project yesterday, 100,000 tablets were delivered to students at 3,500 schools in 81 provinces of Turkey. In April, 350,000 interactive smart boards will be delivered to classrooms across Turkey.
Speaking at the ceremony, Erdoğan said the project was a landmark for Turkish education: "We are fundamentally changing education with a unique, modern educational infrastructure. In the past, Turkey did not have an adequate number of schools, nor enough teachers for all students. Prices of textbooks and stationery were high. This is what we left behind. We attended school in classrooms where 70, sometimes 100, students were in a small room. Our children deserve the best, so we allocated most of the budget to education when we drafted it."

Erdoğan emphasized that his government had built 205,000 classrooms in 11 years, more than half the number of classrooms built in the last 79 years. He pointed out that thanks to new classrooms, the number of students per classroom was reduced and they seek to lower that number further to a maximum of 30 students per classroom. Erdoğan also mentioned reforms in textbook distribution: "Textbooks are now available for free and this is what any government ought to do. Beginning this year, we will provide free textbooks for private schools as well." He added that the number of libraries and laboratories at schools would increase to 22,000 and 35,000 respectively, and new elective courses for grade schools —from Quran lessons to law and foreign languages— are being introduced. The prime minister said the government also subsidizes education for children from poor families.

The pilot stage of the tablet project was launched in 2010 when 8,500 tablets were delivered to 52 schools in 17 provinces. In 2013, 49,000 more tablets were delivered. The Ministry of Education also furnished high school classrooms with 84,921 smart boards, which can be connected to tablets; thus providing an interactive education experience for students. Within three years, students in all primary, elementary and high schools across Turkey will be supplied with tablets.

Tablet computers will be provided by the Turkish company Telpa. The company will deliver General Mobile tablets, a Turkish owned company based in the United States. Apple backed out of the tender for tablets when the Turkish Ministry of Education required bidders to provide USB connections for the tablets and gave priority to Turkish companies. The tablets have an application to connect to smart boards, word processing software and e-books. An application store is also pre-loaded with educational applications for download. While lessons are in progress, teachers will be able to download whatever online content they deem necessary for their classes and project the content onto the interactive smart board. Tablets can also be connected through a network covering all provinces of Turkey, enabling teachers to interact with each other for training purposes.

The FATİH project aims to integrate state-of-the-art computer technology into Turkey's public education system. Turkey's education system has undergone a number of major changes since the AK Party took power in 2003. Most significantly, university entrance exams underwent a series of changes. The government now plans to lift the exam entirely and implement a performance assessment system. Under the new system, university applicants will be evaluated based on their skills and achievements in extracurricular activities. Prep schools for university will also be shut down in September, 2015. The government plans to transform the prep schools into private primary schools, secondary schools and public education centers.

Turkey's education system faced criticism in the past, particularly over the low number of schools available to accommodate an ever-growing number of students. With an increase in the number of schools in recent years, images of crammed classrooms disappeared; although underdeveloped regions in remote parts of Turkey still suffer from an insufficient number of teachers. The government also introduced 12-year compulsory education in 2012, replacing the previous eight-year compulsory education system.