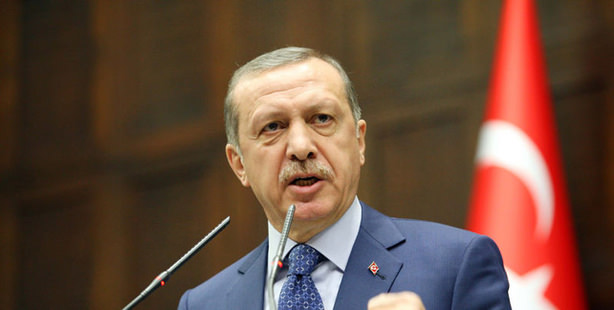 During the AK Party’s latest meeting in Ankara, Prime Minister Recep Tayyip Erdoğan touched on recent events in the country, including the Gülen movement-orchestrated Dec. 17 operation aimed at discrediting the ruling AK Party

"The Dec. 17 coup attempt has completely failed and backfired," Erdoğan said, adding that those behind it have two targets left: the March 30 local elections and the reconciliation process with the Kurds. Erdogan stressed that efforts to undermine the economy, national institutions and stability have proven unsuccessful as 4 billion dollars of foreign currency has entered the country since mid-December.

Criticizing the opposition Republican People's Party (CHP) and Nationalist Movement Party (MHP) for failing to show up to vote for the restructuring of Supreme Board of Judges and Prosecutors (HSYK), the Prime Minister expressed his concern about their lack of action. "They [the CHP and MHP] oppose the HSYK law, yet do not bother showing up at the parliament to cast their vote." The prime minister noted that only 28 MPs voted nay, a significantly small number to formally oppose the law. He claimed that instead of expressing their dismay through political means, these parties are seeking to foster violence, hamper the political process and send a clear signal of how uncommitted they are about standing up for their stated ideals.

Additionally, CHP received special criticism for their negative appraisal of the justice system, judges and prosecutors prior to the Dec. 17 operation whereas now they are in favor of the former and support its decisions. "Both parties have never been so wretched in their entire political history," said Erdoğan, who went on to say that the Turkish public, disturbed by the actions of these parties will make known their stance at the polls on March 30.

In reference to the Jan. 1 and Jan. 19 raids on trucks belonging to the National Intelligence Agency's (MİT), Erdoğan stated that it amounted to an act of treason. "This operation consists of spying and treason," he said.

Erdoğan also addressed the machete plot organized by the CHP during Gezi Park incidents of June 2013 when a man with a machete took to the streets to attack protestors in order to defame the government: "CHP members confessed that the CHP organized the plot and the same thing will happen now. We will not be a tool of such plots."

Hopeful about the future of Turkey, Erdoğan indicated that elements behind the Oct. 17 operation and similar groups are the last obstacle in the way to democracy in Turkey and will soon be extinguished.
Erdoğan also touched on the reconciliation process with the Kurds, saying it has become a target. "Thank God my Turkish and Kurdish brothers and sisters do not fall for these provocations, or listen to these perpetrators." Erdoğan also emphasized that one year has passed without violence in Kurdish regions of the country, an unprecedented occurrence in Turkey for the last 30 years, and that the government reached its goal without appeasing terrorist groups or contravening a single article of the constitution.

The prime minister ended his speech by stating that his party will not be preoccupied with dirty plots of the parallel structure and their supporters. Instead, "the AK Party will occupy itself with what is important and beneficial for the Turkish public," said Erdoğan.