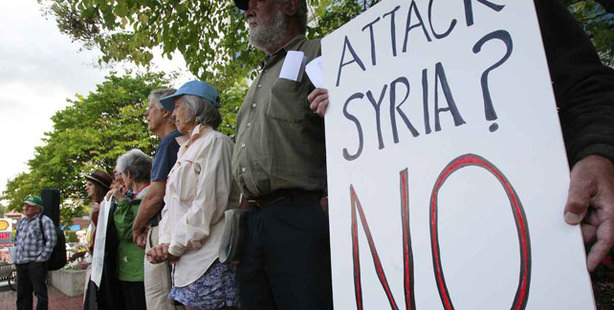 If the U.S. remains indecisive, Turkey may have to act alone to tackle growing security and refugee problems

Last Saturday in Geneva, the United Nations mediator for Syria, Lakhdar Brahimi declared failure of the negotiations between the Assad regime and opposition representatives and apologized from the people of Syria. Upon the failure, frustrated U.S. President Obama called for a review of policy options saying, "There will be some intermediate steps that we can take to apply more pressure to the Assad regime and we are going to be continuing to work with all the parties concerned to try to move forward on a diplomatic solution." Nevertheless, Obama did not disclose what steps he has under consideration, but U.S. secretary of state John Kerry said earlier that a set of new options are under discussion.

Meanwhile, Republican U.S. Senator John McCain reacted to the failure of the latest round of Syrian peace talks, declaring that the Obama administration's "policy towards Syria has been an abysmal failure and a disgraceful one." On the other hand, U.S. Secretary of Homeland Security Jeh Johnson said on Feb. 7, "Syria has become a matter of homeland security." Moreover, the Pentagon's press secretary John Kirby told reporters last Friday that the Defense Department, which has drawn up a range of military options, is being asked to contribute new ideas. "In general, there's an interest in coming up with other options in Syria moving forward," Kirby said.

All of the emerging developments raised the question of military intervention in Syria. However, the previous performance of Obama administrations is not promising. Last August, the Assad regime used chemical weapons to attacks civilians. Thereafter the U.S. came to the brink of intervention and backed down. The indecisiveness of Obama administrations has been widely criticized. "A timely U.S. intervention that could have ended things early was ruled out by the president. Now, extremely late, he has asked for options. Here's one: Do something!" Washington Post columnist Richard Cohen said on Tuesday. But from another perspective, Kadir Üstün, Research Director of the Foundation for Political, Economic and Social Research (SETA) in Washington D.C., believe that military intervention is unlikely. "I don't think Obama will intervene militarily. He may reconsider arming the opposition – currently being done in a very limited fashion under the direction of CIA – but the opposition has to demonstrate a lot more organization and strength than it has so far. Another focus for the U.S. is to counter al-Qaeda related groups such as ISIL. If the opposition fights al-Qaeda in Syria, it may receive more help but it would be doubtful if the U.S. would arm the opposition in such a way to bring down the regime."
Şaban Kardaş, director of the Center for Middle Eastern Strategic Studies (ORSAM) shares similar sentiments: "I don't think military operation will come on table again. From my point of view, the U.S. will seek other options including the supply of heavy weaponry to opposition forces, which seems like more realistic than a military operation."

On the other side of the world, Turkey has been feeling abandoned with respect to the Syrian issue. Many countries did not grant the desired support, burdening the country with the heavy cost of the brutal civil war. Turkey, having a 900-kilometer long border with neighbor Syria, maintains its "open door" policy for Syrian refugees. The number of refugees at Turkey-hosted border camps and city centers has exceeded 714,000. Since the beginning of the Syrian civil war, Ankara spent $2.5 billion for the Syrian refugees. Furthermore there is an ongoing security threat for Turkey from the Syrian side. In 2012, the Turkish jet shot down by Syria and Turkey changed its rules of engagement. With continuing border violations, the Turkish Armed Forces (TSK) hit a convoy of the al-Qaeda linked ISIL, last month.

As a result of the refugee problem and border violation, Turkey wants to establish a buffer zone and open a humanitarian corridor towards Syria. The most important statement on the matter came from President Abdullah Gül during his visit to Italy. Referring to the latest developments in Syria, President Gül said, "We have seen this in Afghanistan. It is uncertain where these things will lead. Therefore, there is a very big difference to our perception of threat today to four or five years ago. At that time, the greatest threat for us was the struggle against the terrorist acts of the Kurdistan Workers' Party (PKK). Today, how many groups are there? If we don't intervene immediately, tomorrow we may encounter a force that outmatches ours."

The Obama administration will decide about their degree of involvement in Syria in the coming days. If the U.S. comes up with a common strategy to empower the opposition, that would strengthen Turkey's hand and would also present an opportunity to tighten .US.-Turkey relations. If the U.S. remains indecisive Turkey may have to act alone to tackle with growing security and refugee problems.