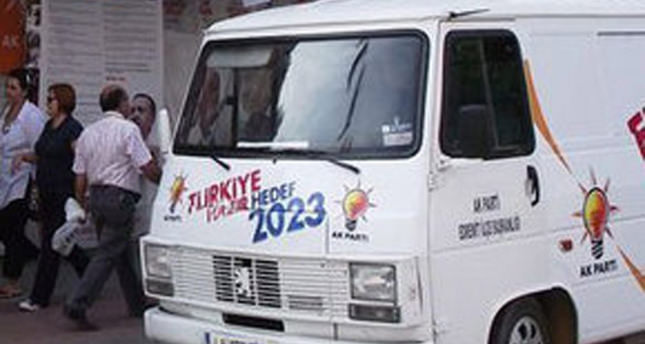 Following the last weeks attack on its mobile office, the party's campaign vehicle is attacked by a group of protesters on Tuesday

A group of protesters hurled eggs and paint on an AK Party campaign truck in Istanbul's Kadıköy district on Tuesday. Riot police deployed at the scene dispersed the protesters who refused to leave and demanded the removal of the truck. Four protesters resisting the police were arrested.

Last week, a mobile office of AK Party's mayoral candidate for Istanbul's Beşiktaş district was attacked by a group of demonstrators. Some demonstrators hurled eggs on the vehicle while others painted anti-government graffiti on its exterior. It is not known whether both attacks were committed by the same group. The attack in Beşiktaş was claimed by the Abbasağa Platform, a small anti-government organization affiliated with organizations involved in holding anti-government rallies in Istanbul's Gezi Park last summer.
Municipal elections across Turkey will be held on March 30.

Although there were no reports of any significant violent incident, tensions are on the rise between rival political parties. An adviser to a candidate for the opposition Nationalist Movement Party (MHP) was killed when a group of people raided a campaign office in Istanbul's Esenyurt district last month. The office of Mustafa Sarıgül, the mayoral candidate for Istanbul for the Republican People's Party (CHP), was also attacked twice in the past few months. In January, unknown assailants set the car of a local AK Party director on fire in the southeastern Turkish province of Hakkari.

The elections will be a tough test for AK Party that weathered nationwide protests last summer and an anti-graft probe aimed to discredit the government. Notwithstanding the seemingly strong competition from the opposition, the polls place the party way ahead of the main opposition CHP.