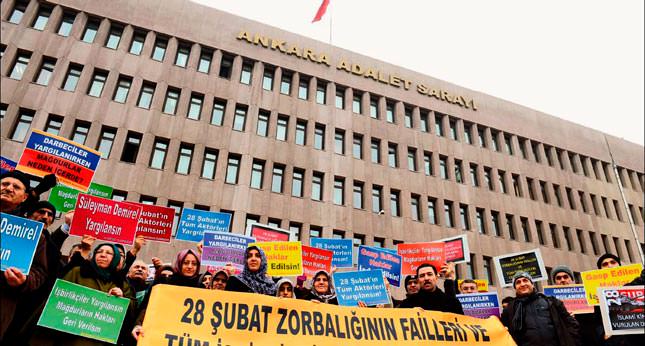 Years after the 1997 coup that targeted conservative Turks, people suffered from blacklisting practices and defamation during the coup hope justice will prevail with trial of those who led the operation

A total of 103 people are standing trial on charges of attempting to topple the government in 1997. All defendants, including former generals Çevik Bir, Çetin Doğan, Erol Özkasnak, Kenan Deniz and İdris Koralp, were released on probation in previous hearings.
Defendants were accused of overthrowing the Refahyol coalition government by issuing ultimatums through the National Security Council.
The Women and Democracy Association (KADEM), a local nongovernmental organization, filed a petition to the court to be appointed plaintiffs on Wednesday. In a statement, KADEM said Feb. 28 was "a complicated and difficult process that affected thousands of people for years." They claimed the trial was "disowned." "As KADEM, we appeal to be plaintiffs in the trial to show that we oppose intervention in democracy, to raise awareness to the plight of the victims." KADEM officials said women were particularly affected by the Feb. 28 coup, as many women had to terminate their education and careers due to a ban against wearing headscarves and suffered from a psychological trauma. Lawyers for Esra Albayrak and Sümeyye Erdoğan, daughters of Prime Minister Recep Tayyip Erdoğan also filed to be plaintiffs. The two were forced to study abroad after not being allowed to wear headscarves at Turkish schools during the coup. Civil servants and students in Turkey were banned from wearing headscarves since 1980s under the pretext that it went against the secular nature of the state.
The ban also applied to public spaces such as schools, courtrooms and universities, preventing women with headscarves even enter into these places. Previously, the measures were not strictly implemented. Prohibitions against the ban were strictly enforced starting in 1997.
Safiye Özdemir, the head of the Women's Committee of Memur-Sen and Eğitim-Bir-
Sen, two unions representing civil servants and teachers, said the organizations were preparing a report on the victims of Feb. 28 coup.
The report will be released next week, on the 17th anniversary of the coup. Özdemir said in a telephone interview the trial did not proceed as expected. She noted the trial focused on the army's role in the coup, while civilian involvement was downplayed. "Civilian bureaucracy, academia and the media were also involved in this coup," said Özdemir. "The mistreatment of people and blacklisting practices were much more prevalent amid civilian bureaucracy."
Though the coup was spearheaded by the military generals, members of judiciary and academia also participated in campaigns targeting conservatives. Istanbul University president Kemal Alemdaroğlu, for instance, was a staunch opponent of wearing the headscarf at the university and an active proponent of the ban.
The coup came two years after the Welfare Party (RP) won the general elections in 1995. Although it did not openly promote shariah, secular circles in Turkey considered the party a reactionary movement that sought to bring the country under religious law. Through harsh statements, top generals, Supreme Court officials and other "defenders" of secularism warned the government against Islamist tendencies, despite the RP declaring no such intentions. Eventually, on Feb. 28, 1997, the National Security Council convened and called on the government to comply with laws ensuring the secular state. In the face of these developments, Erbakan resigned from office on June 18, 1997.
The coup process included the expelling and blacklisting of headscarf-wearing women and men performing Islamic prayers from public institutions.