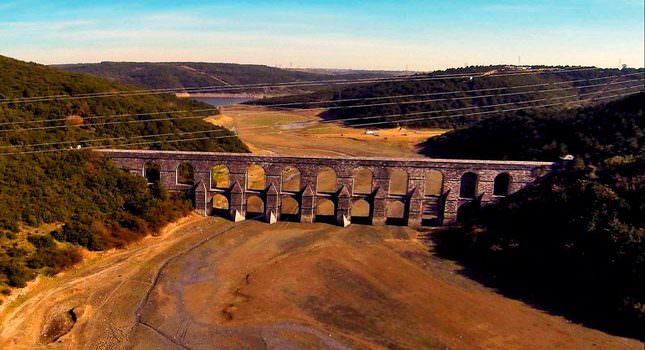 As low precipitation led to concerns about a looming drought, government officials vowed Turkey will not be affected after measures taken to keep cities' water supplies steady. An onslaught of rainfall and declining temperatures yesterday nourished hopes for a drought-free spring and summer

Rainfall and cold temperatures will affect the country starting from the west to the east by Feb. 27. January, a rainy and snowy month under normal circumstances, was unusually dry this year and triggered concerns of a drought in the coming months.

Low rainfall rang alarm bells particularly for the country's agriculture sector. Turkish government rushed to assuage the concerns.
The Minister of Forestry and Waterworks Veysel Eroğlu said plans are ready to address the drought. "We have emergency action plans against drought," said Eroglu. "A likely drought will mostly affect central Turkey. We will utilize groundwater. Weather forecast is positive and precipitation in the spring months will be adequate enough against the drought."

He said cloud seeding, unsuccessfully utilized in Istanbul during 1990s, will not be employed. Eroglu noted upcoming legislation to reorganize the relevant state authorities for better coordination in management of water resources also help combat the drought.
Istanbul Mayor Kadir Topbaş also addressed concerns about the effect of a drought on the city he represents. Topbaş said although water levels were low in the dams, Istanbul will not have a water problem. "We supplied water to Istanbul from Melen River (in the city of Sakarya) located 186 kilometers away from Istanbul," said Topbaş. "We built infrastructure for water supplies from other resources outside Istanbul. A new dam will be built on Melen River and this dam will provide water to Istanbul enough for more than one year.
We project that Istanbul will not face a water shortage at least until the next century."

Eroglu also underlined that Istanbul, despite its population of 17 million and consumption of 2.5 million cubic meters of water daily, did not suffer from water shortage. Some experts, on the other hand, claim Istanbul's water supplies will run out in the coming months and urge authorities to take precautionary measures to store water, including occasional cuts in water supplies. According to the alarming data provided by experts, water levels in dams supplying water to Istanbul will decrease as much as 40 or 45 percent. This would not be enough to meet the demand in the city.

Istanbul, the most populated city, was gripped with drought in the early 1990s. The municipality took unsuccessful measures to fight the drought, including cloud seeding, the transport of water from other places via vessels and frequent cuts in water supplies to prevent overuse. Long lines formed before fountains on the streets, sole source of water for residents in some neighborhoods of the city.

Meanwhile, Istanbul Waterworks Authority (ISKI) reported a drop in the city's reservoirs of under 30 percent, which is the lowest in the last 10 years. Although much of the media coverage regarding the drought focuses on Istanbul, the country in its entirety is facing a water shortage. Meteorologists say because Turkey is situated in the middle of high and low pressure weather system, the combination of the two systems leads to a drop in the density of rainfalls or extremely hot weather. Adding to Turkey's drought woes, German scientists found in their recent study that 2014 is expected to be "a record year" for hot weather due to the effect of the El Nino weather pattern, which will increase temperatures toward the end of 2014.

Drought will undoubtedly hit the agriculture sector hardest. According to experts, the country's vegetation is already in danger due to man-made damage, including urbanization, migration, and the rapid population growth. In turn, these factors prevent Turkey from its share of rainfall from international weather systems and eventually lead to drought.

To address future drought concerns, the government initiated the "1,000 Artificial Lakes in 1,000 Days" project in 2012.
Through artificial lakes, one billion cubic meters of water is to be stored and used for irrigation of 2.5 million acres of land used for cultivation. Despite measures taken to address the threat, agriculture and the 2014 wheat harvest in particular remain at risk. A foreign research and consultancy firm surveying the drought's effect warned that the poor rainfall this year may lead to a decrease in Turkey's agricultural exports this year. Turkey, one of the largest wheat producers in Europe, broke a record for wheat harvest in 2013 with 22.1 metric tons. A large percentage of this is for domestic consumption, but the country also exports wheat to other countries in the region as well as Asian countries such as Philippines and Indonesia. Mehdi Eker, the minister of agriculture, dismissed the reports that Turkey faces a great risk and said the government hoped anticipated rainfall in the spring will ease drought concerns. Eker said his ministry established teams to test the risk of drought across Turkey, determine which areas will be affected by a possible drought and contribute to drafting a roadmap to address the issue. Eker said measures against drought, at least for the upcoming year, will include encouraging the growing of crops that are able to be cultivated in a short period of time. He also noted that the farmers whose crops may be affected by a drought may be subsidized by the state.

The lack of rainfall in November and December 2013 dealt a blow to grain yields, concerning the growers across the country.
Its greatest impact will most likely be in central Turkey, the heart of agriculture sector in Turkey. The data released by the State Waterworks Authority (DSI) shows the average cumulative precipitation between October 2013 and January 2014 decreased dramatically compared to previous years. Scarcity of rainfall is particularly devastating as wheat is planted in autumn and winter and germinates before the mid-winter.

With decline in arable lands due to the drought, families eking out a living by growing crops will be in dire straits. As a measure against this, the government will include drought among risks covered by agriculture insurance.
Ali Ataiyibiner, president of Meram Chamber of Agriculture in Turkey's wheat belt Konya, said although farmers faced drought risk, occasional rainfall near the end of January and this week helped them to avoid the risk. "With temperatures back to seasonal normal, crops rapidly grow.

Based on this, grain yield in Konya, will not be affected much by the drought. Still, we should wait for spring precipitation in the months of April and May to see whether the drought risk is completely eliminated," he stated.