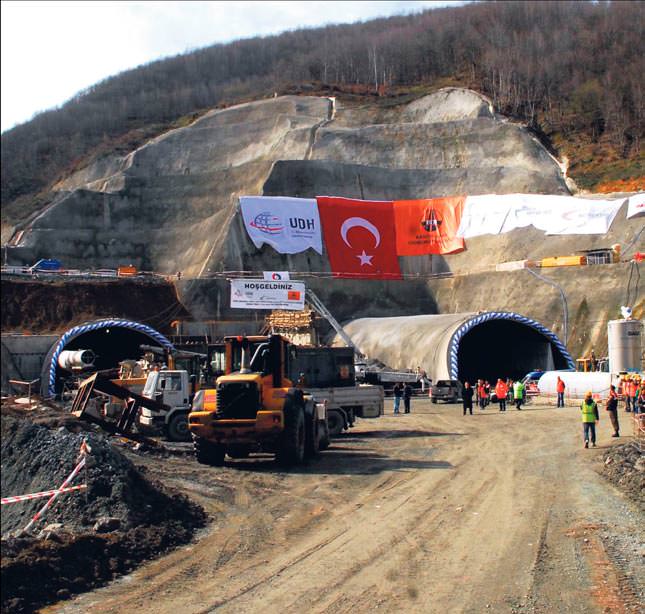 by Mar 04, 2014 12:00 am
Istanbul (Daily Sabah) - A newly opened six-lane tunnel in Turkey's northwest spans 3.5 kilometers. The Samanlı Tunnel located in the province of Bursa was completed yesterday Two years after construction began, the tunnel was officially completed yesterday with a ceremony. Composed of two tubes, the tunnel is part of a highway that will connect the Gebze district in the northwest to İzmir in western Turkey.

Though officially named the Gebze-Orhangazi-İzmir highway, the project aims to decrease travel time from Istanbul, adjacent to Gebze, to Bursa and İzmir. The 405-kilometer long highway will open to traffic in 2015.

The Gebze-Orhangazi-İzmir highway will also see the construction of a bridge on İzmit Bay, which will be the fourth longest bridge in the world at 1,550 meters upon completion.

Touted as Europe's biggest infrastructure project, the project is estimated to cost TL 11 billion. The Samanlı Tunnel is the latest in government investments to improve the country's roads and facilitate travel to and from Istanbul, Turkey's most populous city. Last October, the Marmaray Tunnel, the world's first sea tunnel linking two continents, was inaugurated in Istanbul.

After taking power in 2002, the ruling AK Party undertook a nationwide project to renew and extend the country's existing road infrastructure. A total of 21,227 kilometers of highway was built.