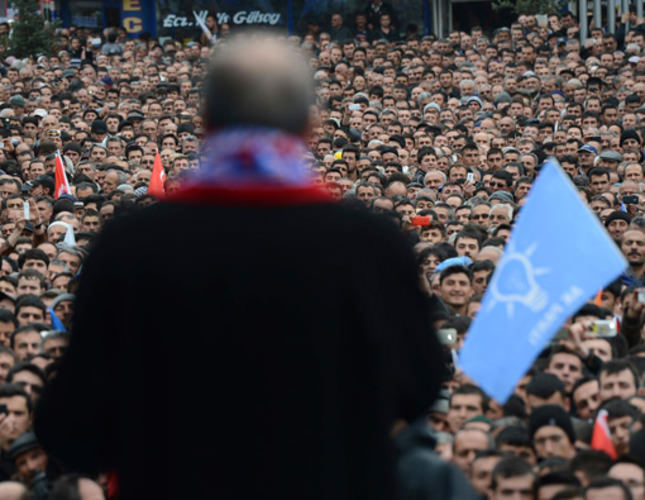 Turkish Prime Minister Recep Tayyip Erdoğan claims that the Gülen Movement is seeking to stage a civilized version of Turkey’s first coup on May 27, 1960 when the Turkish military overthrew the legitimate government.

Istanbul (Daily Sabah) - As campaigning ahead of local elections scheduled for March 30 continued, Prime Minister Recep Tayyip Erdoğan spoke with journalists after his rally in Osmaniye, a city in southern Turkey. When asked about claims that controversial imam Fethullah Gülen – who has remained in self-imposed exile in the U.S. for 14 years – might return to Turkey like Ruhollah Khomeini did in Iran, Erdoğan said, such reports are exactly what they [Gülen's followers] are aiming for and the members of his movement see Gülen as a "Messiah." Khomeini was an Iranian religious leader and one of the leaders of the 1979 Iranian Revolution, who lived in exile for 14 years due to his opposition to the pro-Western shah of Iran.

Khomeini aligned with the Iranian revolutionaries and toppled Mohammad Reza Pahlavi, the Shah of Iran. After the revolution, Khomeini declared Iran an Islamic republic and began to exercise ultimate authority in the nation. The controversial religious leader Khomeini portrayed the West as "Satan" and the Iranian government backed numerous groups which carried out terrorist bombings, hijackings and assaults. Regarding the recent wiretapping scandal and Dec. 17 operation carried out by members of the Gülen Movement in the police and judiciary, Erdoğan said, "These developments have had a positive effect and encouraged citizens to support the AK Party in the arenas. Unity and solidarity grew across the country. We have found an opportunity to directly give our messages to the AK Party grassroots." Ahead of local elections, Turkey has been shaken by the movement's efforts to defame and destabilize the government. In November 2013, the government's move to close down prep schools, a large portion of which are run by Gülenist followers, caused a stir in the movement, and led them to strike back at the government by staging the Dec. 17 operations.

Tension between the government and the Gülen Movement escalated after the Dec. 17 operation when a number of business people and the sons of three former cabinet members were arrested. Erdoğan described the operation as a "dirty coup plot" to undermine the stability of his government and responded by reassigning certain police and judicial officials. After being revealed last week, the movement's wiretapping scandal involving nearly 3,000 political figures and businessmen further worsened relations between the once close allies.

Erdoğan said these incidents saw relations between the Republican People's Party (CHP) and Nationalist Movement Party (MHP) improve. Erdoğan touched on the late journalist Savaş Ay's interview with Fethullah Gülen in which Gülen said "even if the [Angel] Gabriel had founded a party, I would not have voted for him." Erdoğan said Gülen has since acted against his own statements and asked his followers to vote for opponents of the AK Party. Portraying actions by Gülenists as a "coup plot" against the government, Erdoğan said after the local elections, governmental bodies infiltrated by Gülen's minions would be completely purged, and the followers who misused their authority to serve the Gülen Movement would be removed.

Referring to the September 2012 constitutional referendum in Turkey that proposed amendments to the makeup of the judiciary, journalists asked Erdoğan why the Gülen Movement tried to convince people to vote in favor of the new amendments. Erdoğan said "We wanted to believe in their common sense, but they [Gülenists] don't have any. Their only aim is to infiltrate Turkish police and judiciary and they did it." He added that if AK Party wins local elections, the first move will be to counter Gülenist infiltration in the Turkish state and promote a "healthier" government structure.