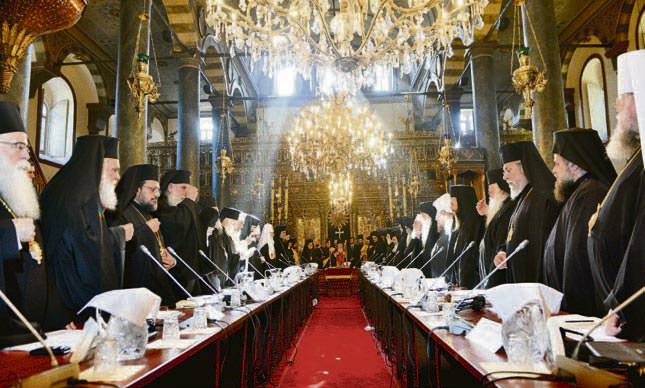 Istanbul, the seat of the Fener Greek Orthodox Patriarchate, is hosting a three-day meeting of Orthodox church leaders. They will discuss preparations for a reformative synod and the situation of Christian communities in the Middle East facing conflicts

Istanbul - Patriarchs and archbishops from 14 Orthodox churches gathered yesterday in Istanbul for a three-day meeting to discuss the current situation of Christians in the Middle East. Prelates will also discuss the theological and technical procedures of the Pan-Orthodox Synod which is scheduled to take place in 2015. Reforms to Orthodox churches will be discussed at that synod. Preparations for the 2015 synod will include discussions on relations with other Christian denominations.

The meeting, known as the Sacred Synaxis, will end Sunday, when patriarchs and archbishops will attend the Orthodox Feast.
Representatives of the Ukrainian Orthodox Church will be absent from this year's proceedings. The Russian Orthodox Church and Fener Greek Orthodox Patriarchate have wrestled for control of the Ukrainian church in the past with both sides claiming jurisdiction over the church, though in recent years the tug-of-war has largely abated.

In 2009, Bartholomew and Russian Orthodox Church Patriarch Kirill issued a message underlining the unity of the Fener patriarchate and the Russian church. The Fener Greek Orthodox Patriarchate, which describes itself as ecumenical, has struggled to maintain this status. The Turkish state, however, since the foundation of the Republic of Turkey in 1923, accepted the patriarch simply as the spiritual leader of the Greek Orthodox community in the country and forbade the patriarchate to be governed by non-Turkish citizens. In 2004, the patriarchate was allowed to include bishops from outside Turkey in the synod of the church.

On the eve of the meeting, Patriarch Bartholomew made headlines when he expressed his opposition to alleged plans for the conversion of Istanbul's Ayasofya (Hagia Sophia) Museum to a mosque. According to media reports, in an address to a Greek Orthodox congregation last week, Bartholomew said the "entire Christian world" would stand against the conversion, "notwithstanding their denomination."

Bartholomew said Ayasofya, if converted, should be converted to a church. Ayasofya, originally built as a Greek Orthodox basilica, was converted to a mosque after the Ottoman conquest of Istanbul in 1453.
In 1931, it was opened as a museum. Last year, Turkish Deputy Prime Minister Bülent Arınç implied that it may be converted back to a mosque.

The patriarchate, in its self-appointed ecumenical status, is based in Istanbul since the times of the Byzantine Empire that collapsed after the Ottoman conquest of the city.