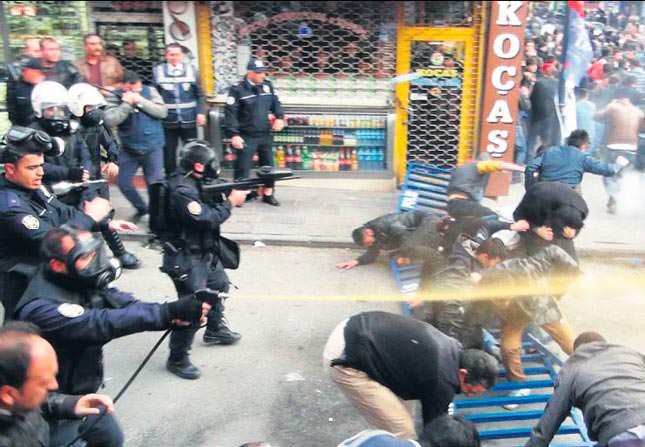 by Ihlas News Agency Mar 07, 2014 12:00 am
Aksaray - A group of protesters attempted to attack members of the Peoples' Democratic Party (HDP) during the opening of the party's office in the central Turkish province of Aksaray on Wednesday.

Police intervened to disperse the crowd. In the ensuing clash, two police officers and 19 others were injured. Forty protesters involved in the clashes were detained.

Protests began as HDP lawmaker Sebahat Tuncel inaugurated the party office. Demonstrators chanting slogans against the terrorist Kurdistan Workers' Party (PKK) marched toward the building and demanded its closure. Some demonstrators hurled stones at a bus carrying Tuncel and others. After their initial dispersal, the protesters reconvened and confronted riot police.

In a written statement, Aksaray Governor Şeref Ataklı said a police officer had his legs broken in the clashes and 19 people out of a 3,000-strong group of protesters were hospitalized suffering the effects of tear gas fired into the crowd by security forces. The governor said the province was calm as of yesterday. HDP, which is an offshoot of the Peace and Democracy Party (BDP), had its offices in Urla in the western province of İzmir, attacked in February by a group of nationalist activists. Both HDP and BDP are known for their close ties to the PKK.

Ahead of the March 30 local elections, tensions remain high in the country with attacks targeting the AK Party and the Nationalist Movement Party (MHP). Assailants hurled firebombs at the house of an AK Party mayoral candidate in the southeastern Turkish province of Şırnak on March 1. On Jan. 26, a press adviser for MHP was killed when assailants attacked one of the party's campaign offices in Istanbul's Esenyurt district.