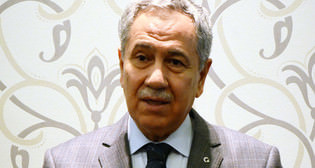 by Mar 08, 2014 12:00 am
Konya (AA) - Wiretapping in Turkey got out of control and those responsible must be brought to account, Turkey's Deputy PM Bülent Arınç said on Saturday morning.

Arınç said investigations into the country's national telecommunications authority revealed that tens of thousands of people have been wiretapped and that the recordings have been preserved.

"These are embarrassing charges for Turkey; I hope that those who conducted illegal wiretappings will be held to account," he said.
Wiretapping scandals have made headlines in Turkey since Prime Minister Recep Tayyip Erdoğan announced in late 2012 that a "bug" had been found in his office.

In February 2014, a series of recordings featuring Erdoğan speaking to a number of high-profile figures surfaced in the social media.
Erdoğan called some of these recordings authentic, some others "fabricated".

Arınç also commented on the release of former chief of defense staff Ilker Başbuğ, who was convicted last August of plotting to topple the government as the head of 'Ergenekon' - an alleged secret network of hard-line nationalists.

"I welcome the release verdict. We have always been against lengthy and indefinite periods in pretrial detention," Arınç said.

The constitutional court ruled on Thursday that the rights of Ilker Başbuğ were violated, which opened the way for his release on Friday.