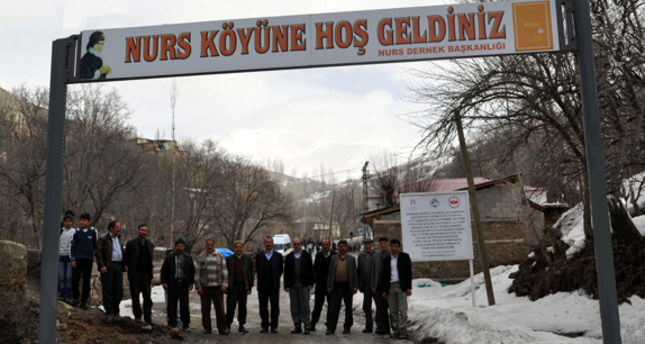 The village of Nurs in southeast Turkey where Fethullah Gülen's mentor, Said Nursi was born, is on Prime Minister Recep Tayyip Erdoğan's side

Bitlis - Community members from the village of Nurs in southeast Turkey, where the influential Turkish Islamic scholar Said Nursi was born, have expressed their support for Prime Minister Recep Tayyip Erdogan, as his government says it is being targeted by a group originally inspired by Nursi's teachings.

The head of the Nurs Village Association, Hikmet Okur, told the Anadolu Agency on Sunday that media reports saying the villagers opposed Erdoğan, were false.

"We are not against Erdoğan, and never were," Okur said. "Elections tell the whole story. The village of Nurs has always shown the highest level of support for Erdoğan in previous polls in Hizan." Hizan is the broader region in which Nurs is located.

Said Nursi was a renowned Islamic scholar who lived in the first half of the 20th century and preached a Sufi version of Islam that emphasized the attainment and preservation of faith as the most important aspect of religious life.

Nursi's teachings and his body of works -- the Epistles of Light -- have been a source of inspiration for the "Hizmet" movement of U.S. based cleric Fethullah Gülen, whom the Turkish government accuses of forming an illegal organization within the police and judiciary, popularly referred to as the "parallel state."

Gülen, who did religious studies with several of Nursi's disciples, makes frequent references to Nursi in his books and speeches and announces him as his mentor.