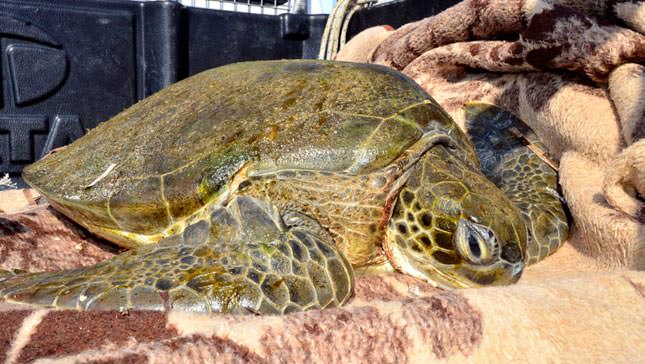 by daily sabah Mar 10, 2014 12:00 am
Istanbul - While fishing in the early of hours of the morning on the shores of Bodrum's Gündoğan district, fishermen discovered a loggerhead sea turtle (Caretta Caretta) floating on the surface of the water.

The fishermen pulled it out of the water and into their boat. They immediately requested help from the Search and Rescue Association (AKUT), which responded to the call and came down to the beach. Assisted by local residents, the AKUT team arrived at the beach and wrapped the turtle in a carpet. The team immediately took action to keep the wounded sea creature alive by pouring seawater onto it.
Shortly thereafter, the loggerhead was brought to the Center for Research and Rehabilitation of Sea Turtles (DEKAMER).

Bodrum's AKUT team leader, Saadettin Uslu, said, "We called the Center for Research and Rehabilitation of Sea Turtles. Now, we are transferring the loggerhead to Dalyan with our own vehicle. The turtle has a wound on its right flipper. It is 70 centimeters in size, and [weighs] 25 kilos."

Caretta Caretta turtles have a very special place in the heart of Turkish society. İztuzu Beach, located on the Aegean Coast is a natural nesting environment for the animals, which visit the beach each year to lay their eggs in its golden sands. İztuzu, although a very popular tourist destination, has been placed under protection to help this quiet and elusive creature survive. No tourist resorts have been built in the area, despite strong interest in doing so.

One of the largest marine reptiles, on average a loggerhead measures 90 centimeters in length when fully grown, although larger turtles of up to 280 centimeters have been discovered.

Weighing about 135 kilograms, the loggerhead can live to the grand old age of 67. It is known to have existed for about 450 million years and is considered an endangered species.

Protected by the International Union for the Conservation of Nature, the turtles' nesting grounds in Turkey are monitored by various international animal protection organizations.

Each year between May and October, thousands of loggerheads visit İztuzu Beach, which is closed to visitors between 08:00 p.m. and 08:00 a.m. for the turtles to lay their eggs
and hatchlings to reach to the sea.