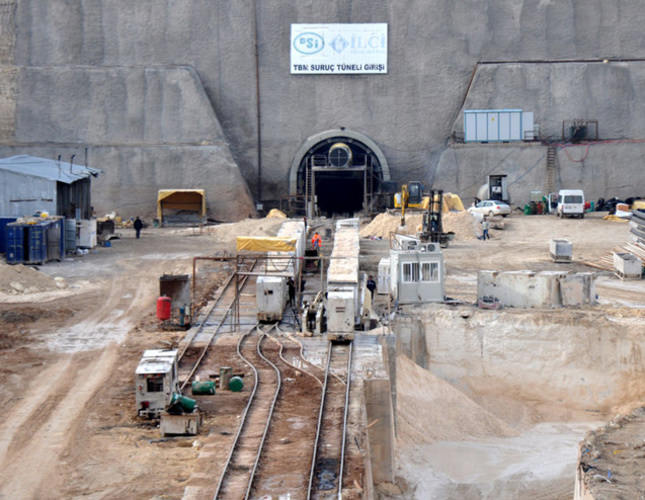 Şanlıurfa - Suruç Tunnel, the fifth largest irrigation tunnel in the world and the largest in Turkey, opened yesterday in the southeastern province of Şanliurfa. The tunnel will help irrigate 950,970 hectares of agricultural land in Suruç Plain, where arid conditions restrict options for alternate crops.

The tunnel is 17.1 kilometers long and will pump nine cubic meters of water per second from Atatürk Dam on Fırat (Euphrates) river to the plain. It is estimated to have a higher flow rate than most rivers in the country.

The excavation for the tunnel started in 2010 after a lengthy process to install the giant boring machine, two years after the tender was finalized.

It forms part of the Suruç Pumped Irrigation Project which was initiated in 1990 but long remained in limbo. The project was tendered in 2008 as part of the Southeastern Anatolia Project (GAP) Action Plan to develop agriculture in southeastern Turkey.

Once the pumped irrigation project composed of hydraulic power stations, dams and various irrigation units is complete, it will create jobs for about 190,000 people and contribute an average of TL 316 million to the Turkish economy annually.

Turkey's southeastern region, due to its arid climate, has always been under the threat of drought. Efforts to improve irrigation are also part of a larger project to encourage growth in the country's long-neglected southeast. GAP, a multi-faceted development project, was a dream of the government since the inception of the Turkish Republic. But the most solid steps to achieve the project were taken in the early 1980s by the government of late Prime Minister Turgut Özal.

Özal sought to develop the economically backward region through a series of projects encompassing agricultural development, rebuilding crumbling rural and urban infrastructure and social projects for education and health to improve the living standards and income of millions of people living in the region. Terror attacks by the Kurdistan Workers' Party (PKK) in the region since the 1980s hindered the GAP project. A drop in attacks by the PKK after the government announced a series of reforms as part of a reconciliation process, saw a revival of growth in the region.