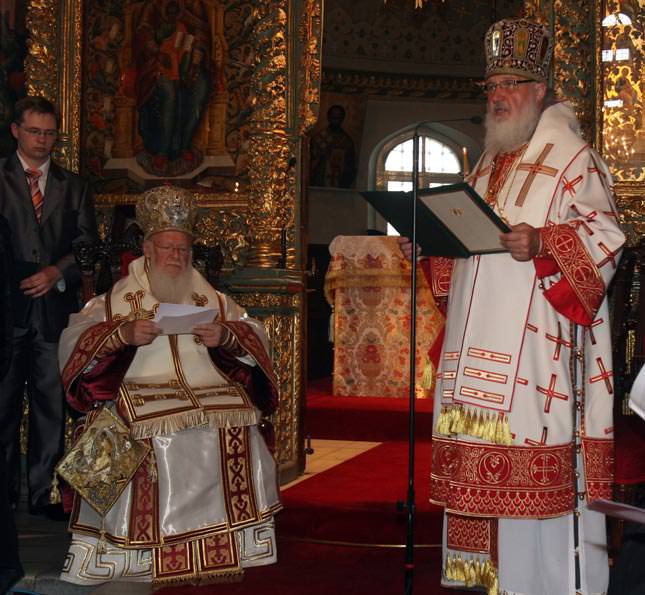 Although both prelates remained polite through the proceedings, the rift between two major churches in the Orthodox world remains unchanged.

Both churches have been competing for decades for ecumenical status in the Orthodox world. The Fener Patriarchate in Istanbul is seeking a "primus inter pares" or "first among equals" status among 12 churches, but the Moscow-based Russian Church has questioned its attempts to do so.

When asked to assess the meeting, Associate Professor Fatih Özbay from Istanbul Technical University Department of Humanities and Social Sciences, said, "The Russian patriarch met with the Russian Orthodox community living in Turkey during his visit. There is an obvious rivalry between the Fener Patriarchate and Russian Orthodox Church. During Kirill's meeting with the Russian community, the opening of a seminary for Russians was also discussed.This was an open reflection of the rivalry between the two patriarchates."

The Fener Patriarchate has sought for years to reopen the Heybeliada seminary in Turkey which has been closed since 1971 under a Turkish law banning private higher education institutions.

Özbay also noted the rise of the Russian Orthodox Church's influence under the administration of Vladimir Putin. "Moscow adopted a new policy for the church and utilized it to drum up the support of Russian diaspora across the world," he said.

The rift between two churches is, in a way, a reflection of U.S.-Russia relations, Özbay said. The Fener Patriarchate has a congregation of about 2,000 people in Istanbul but a large number of congregation members reside in the United States and maintain close ties with Washington. Özbay said the Russian Orthodox Church has been disturbed by Fener's ties with the United States.

The four-day meeting in Istanbul focused on an upcoming grand assembly of the Orthodox churches. Planned since the 1960s, the synod will allow for major changes to the church to be proposed, but Özbay said the meeting scheduled for 2016 will not yield reforms since the divide within the church is unlikely to change.

On Turkey's position in the rivalry between the Fener Patriarchate and Russian Church, Özbay said Turkey needs to pursue a balanced policy and to refrain from distancing itself from any one side. "Turkey needs to maintain good relations with both the United States and Russia, two major powers. So, we cannot sacrifice one side for the other,"