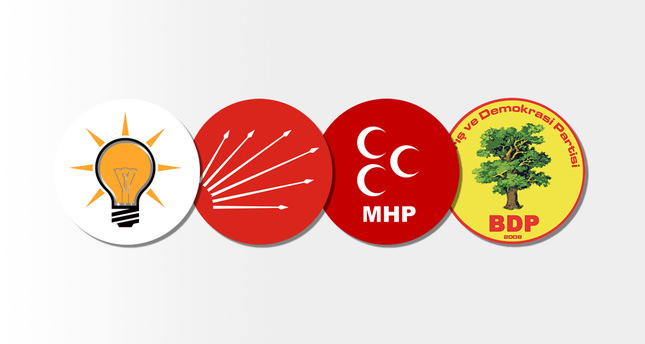 Political parties are taking special measures and posting members at all election offices to ensure security of votes. More than a million election observers from all parties will monitor the counting of votes

ISTANBUL – Political parties in Turkey are taking strict measures against any irregularities in the upcoming March 30 local elections.

This month's local elections will serve as a yardstick for whether the AK Party - in power since 2002 - has lost steam in the wake of massive anti-government protests and a coup attempt in the guise of a graft probe. The AK Party is confident that its voters have not lost faith in it, despite an upsurge in anti-AK Party sentiment at the hands of the Gülen Movement. Nevertheless, rumors are circulating that voters will be manipulated against voting for the AK Party through fraud schemes, and votes for the party will be removed.

Meanwhile, opposition parties claim the AK Party itself will commit fraud to ensure its third victory in the race for municipal seats.

The AK Party is taking a number of measures against possible interference and manipulation, including assigning 600,000 AK Party observers to monitor polling stations.

According to media reports, teams of Gülenists will be assigned to polling stations to influence voters and try to bring support to strong contenders against AK Party candidates, regardless of the party. They will also apparently spread false reports on election results and disseminate reports claiming the AK Party manipulated results via news reports in media outlets affiliated with the movement.

Through smartphone cameras, AK Party polling monitors will take photos of vote counting after the ballots close. Election results photographed by observers, official results from the Supreme Electoral Council and the results of the last elections in 2009 will be compared and analyzed. In the event of an unusual deviation from projected results, the AK Party will appeal to the aforementioned council for a recount. The party sent instructions to its branches in cities and districts for securing a fair election. In addition, polling software was developed for correct and full recording of votes, which will supply data directly to AK Party headquarters.

The AK Party's local branches will assign three observers to each ballot box. All in all, about 600,000 AK Party members will be tasked with monitoring the vote at 196,000 polling stations. Monitors are trained by lawyers on how to detect irregularities, fraud and other crimes related to voting and counting.

The Nationalist Movement Party (MHP) will assign 400,000 people to monitor voting, two observers per ballot box. Observers will be present at every stage of the election, from casting votes to delivering ballots to the electoral council.

MHP also established a monitoring system at its headquarters in Ankara for the immediate analysis of the election results supplied by election observers.

The Republican People's Party (CHP), like MHP, will assign 400,000 observers to polling stations. Observers are trained on the election process and how to report fraud and irregularities. CHP also invites every voter to report any fraud to the electoral council. CHP monitors will take photos of electoral council official reports on the results of every ballot box.

The Peace and Democracy Party (BDP) nominated candidates in 30 out of 81 provinces. The party will assign two observers per ballot box. The party has claimed in previous elections that security forces in some remote parts of southeastern Turkey moved ballot boxes to random polling stations under the pretext of lack of security at polling stations.