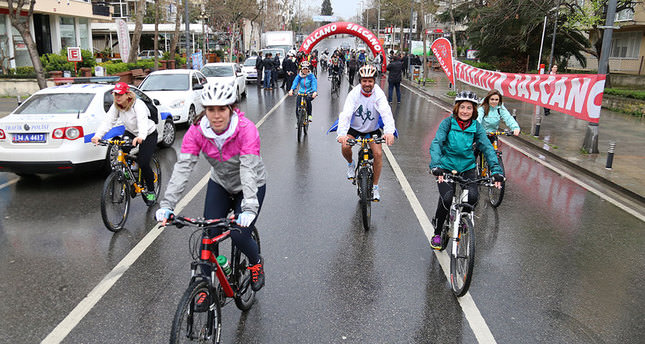 The bicycle, a seldom used means of transportation in Turkish cities, is in the spotlight as the Ministry of Health promotes bicycle riding for better health. A bicycle tour in Istanbul yesterday was the starting point of the ministry's campaign

ISTANBUL – The Ministry of Health organized a bicycle tour in Istanbul yesterday to promote bicycle riding for better health. The project aims to raise awareness of rising obesity levels.

The Istanbul Directorate of Health launched the "Make Way for Bicycles" event on Istanbul's Asian side yesterday. Bicycle riders accompanied by health directorate officials took part in the tour. Major roads were closed to traffic for bicyclists who braved the rainfall.

Directorate of Health officials said the tour aimed to curb sedentary lifestyles and damage to the environment due to vehicular emissions, and encourage bicycle use for better time management. "We are trying to make bicycles a part of daily life in Turkey. People should not see it as a hobby and ride bicycles while commuting. Bicycles will help eliminate obesity, make people fitter, and last but not least, it will curb toxic emissions. We don't have carpools in Turkey so most vehicles occupy roads unnecessarily and cause long traffic jams. Bicycle riding will also help ease traffic snarls. In that context, we want motorists to make way for cyclists," Professor Selami Albayrak, head of the directorate, said.

Murat Suyabatmaz, head of the Bicyclists Association, said bicycles were an important alternative to cars and urged authorities to designate special lanes for bicycles in Istanbul and other cities.

A new survey among 600 children from across Turkey in recent months found that 12 percent of grade school students aged 7 to 12 are overweight. Turkish children increasingly avoid physical activity, according to reports on obesity. Experts attribute high obesity figures to parents who do not exercise daily and set a bad example for children.

According to surveys, grade school students spent less than two hours outdoors on the weekends and less time during the week.
Increasing obesity rates are also attributed to more time spent watching television and other indoor activities.