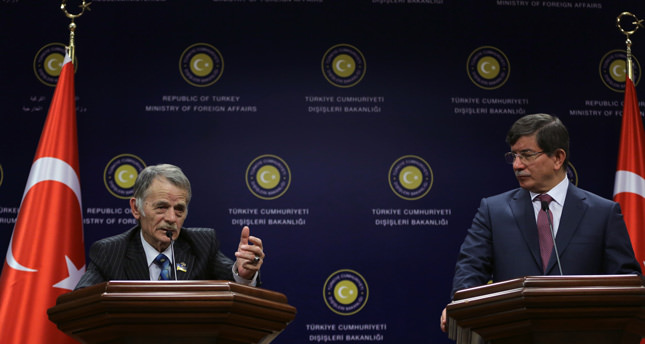 by Mar 17, 2014 12:00 am
ANKARA – Turkey said on Monday that it does not recognise the result of the referendum in Crimea in which voters chose to join Russia, amid fears for the future of Turkish-speaking Tatars in the region.

"This referendum is not recognised, and has no legitimacy," Foreign Minister Ahmet Davutoğlu told a news conference in Ankara, standing alongside Crimean Tatar leader Mustafa Kırımoğlu.

Crimea declared independence from Ukraine and applied to join Russia on Monday, after claiming 96.6 percent support for secession in a referendum the day before.

Many Tatars are thought to oppose annexation to Russia, fearing their rights as a minority will be eroded.

"We did not and will not accept the referendum," Kırımoğlu said. "The future of Crimean Tatars rests with the state of Ukraine."

"I hope this referendum, which is unacceptable, will not lead to new tensions," he said, calling on all concerned parties to act with "common sense" and avoid "military manoeuvres".

Turkey, a NATO ally, says that 12 percent of Crimea's population are Turkish-speaking Tatars who are Sunni Muslims, like the majority of Turks.

Crimea was part of the Ottoman Empire until it was conquered by Russia in the late 18th century. Tatars (the majority population at the time) were accused of collaborating with the Nazis and millions were forcibly removed by Stalin in the 1940s.

Davutoğlu became one of the first foreign ministers to visit Kiev earlier this month, where he met with Ukrainian officials and representatives of the Tatar community.