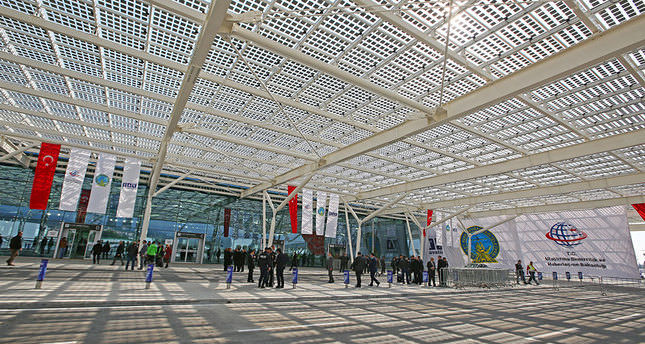 A new domestic terminal was inaugurated yesterday in the western province of İzmir's Adnan Menderes airport. The terminal, with an indoor area of about 200,000 square meters, is touted as the largest of its kind in Turkey

İZMİR – The terminal was opened in a ceremony attended by Prime Minister Recep Tayyip Erdoğan, two years after its construction started.

Built on an area of 210,000 square meters, the terminal will serve about 20 million passengers annually. It has 64 check-in counters, 40 elevators, 30 escalators, a 66-meters baggage conveyor and a capacity to process 5,000 baggages per hour. The terminal also has an indoor parking lot with a capacity of 2,537 vehicles and an outdoor parking lot with a capacity of 3,000 vehicles. It will be operated by TAV Airports, a private airport operator based in Turkey. TAV was awarded the terminal's operation rights for 20 years at 610 million euros in 2011.

Speaking at the inauguration ceremony, Minister of Transportation, Maritime and Telecommunications Lütfi Elvan said they were proud to present one of Europe's largest terminals to İzmir. Elvan said the terminal was latest step in the government's efforts to make air travel more endearing to the Turkish public as Prime Minister Erdoğan envisioned. "We built 16 new airports in various cities and modernized almost all existing airports. Flights to 60 destinations in 2002 increased to 236 destinations in 12 years. Airports across Turkey hosted 150 million passengers last year and Turkey became the third country to experience the most rapid increase in the number of airline passengers. Furthermore, the aviation sector saw a yearly growth between 15-20 percent in one decade," he stated.

TAV invested 250 million euros for the terminal it brands the "most energy efficient in Turkey." The terminal has a number of eco-friendly features such as minimized energy and water consumption through heat pump, rainwater harvesting systems, water reuse system, solar panels and trigeneration plant.