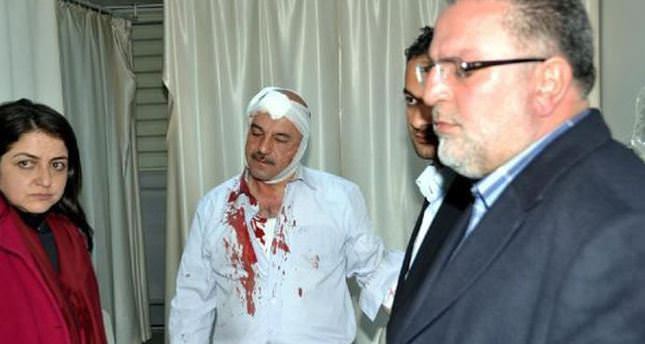 by AA Mar 18, 2014 12:00 am
VAN – Five members of the governing AK Party were injured when a group of Peace and Democracy Party (BDP) supporters attacked them during an election campaign late Sunday in the eastern province of Van.

An angry crowd hurled stones at the car occupied by the AK Party members and chanted slogans in favor of Van's incumbent mayor Bekir Kaya. The injured were hospitalized while the police launched an investigation into the incident.

The AK Party is challenging Kaya, a strong contender from the BDP, with candidate Osman Nuri Gülaçar. Recent polls show Kaya is about 0.6 percent ahead of Gülaçar for the upcoming March 30 elections.

The election process is overshadowed by attacks targeting almost all parties, both governing and opposition. The AK Party's campaign offices were attacked by protesters last week in Istanbul and two AK Party members hanging election banners in a district of the İzmir province were beaten by a group of assailants. The deadliest attack against political parties was in January when a press adviser for the opposition Nationalist Movement Party (MHP) was killed when a group of assailants attacked the party's campaign office in Istanbul's Esenyurt district.