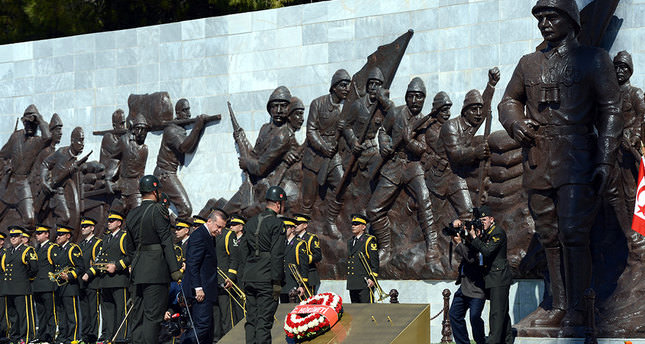 Turkey marked the 99th anniversary of the victory of Ottoman forces over Allied navy led by the British Empire in Gallipoli, while remembering those who were martyred defending the country with the Martyrs Day ceremonies

ÇANAKKALE – Çanakkale in northwestern Turkey, where Turkish troops fought Allied forces in the battle of Gallipoli, was the central point of nationwide commemoration ceremonies on the 99th anniversary of the 1915 battle. Fallen soldiers of the Ottoman army were remembered at solemn ceremonies on the occasion of the Çanakkale Victory and Martyrs Day. Prime Minister Recep Tayyip Erdoğan attended the major ceremony in Çanakkale.

The first ceremony was held at the Atatürk Monument in central Çanakkale yesterday with Turkish officials laying wreaths at the monument dedicated to the founder of the Republic of Turkey. This was followed by a parade of troops. The next ceremony was held at Gallipoli Peninsula, the site of a monument for fallen soldiers.

It included a wreath-laying ceremony, a minute of silence in memory of the soldiers, a 21-gun salute and a recitation of the national anthem. Turkish troops marched in a parade during the commemoration, while the Air Forces performed aerial stunts.

Participants in the ceremonies then visited the cemetery where soldiers martyred in the battle are buried and recited prayers in memory of the soldiers.

Prime Minister Erdoğan, ministers, commanders of the Turkish Armed Forces and other dignitaries attended the ceremonies.

Speaking there, Erdoğan said next year's ceremonies will mark the 100th anniversary of the battle, and they planned a larger-scale commemoration that will be attended by "thousands of people" from countries that contributed troops to the Ottoman army in the battle. In his address to the crowd gathered for the commemoration ceremonies, Erdoğan said: "We live in an independent country today thanks to the martyrs who shed their blood. Turkey is founded thanks to great victories and sacrifices, and our country managed to defeat every country that attempted to end its independence."

Turkey, which sided with Germany in World War I, faced a major push from Allied forces seeking to control the Çanakkale (Dardanelles) Strait, the gateway to the Black Sea from the Aegean and Mediterranean Seas and Istanbul, then-capital of the Ottoman Empire. In February 1915, British and French navies launched a massive attack on the straits. On March 18, 1915, the Allies launched the main attack. When battleships failed to seize it, the Allies dispatched troops that landed on the Gallipoli Peninsula in April 1915. This campaign failed as well, with heavy casualties on both sides. The Allies' total casualties amounted to 187,000 soldiers, while Turkish forces lost about 211,000 troops in the battle, according to Turkish sources, though the exact number of casualties is still unknown.