Millions get ready to welcome Nevruz 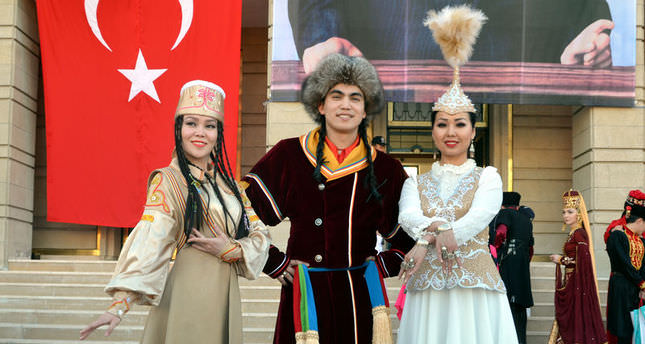 ISTANBUL – The Ministry of Culture and Tourism announced events to welcome Nevruz (also spelled Newroz and Nowroz), the festival marking the beginning of spring. The celebrations, to be held in all seven regions of Turkey for the first time this year, will include concerts performed by the state's orchestras and choruses. The Ministry issued a statement explaining that Nevruz, which also refers to the celebration of the Iranian New Year, is the precursor to spring and symbolizes the migration of Gokturks from Ergenekon, the native country of Turks. With the reconciliation process with the Kurds continuing for more than a year, hopes are high for peace and the Nevruz celebrations this year will be grander than previous years. Today, the guns are silenced, tears have dried and investors have turned their interest to the southeastern region of Turkey.

The big finale to mark a successful year in terms of bringing peace and stability to the region, which was in turmoil for quite some time now, will be held in Diyarbakır on March 21. The pro-Kurdish Peace and Democracy Party (BDP) and the Democratic Society Congress (DTK) also made preparations for Nevruz events in the southeast region. Permission was obtained from the governorship of Diyarbakır to celebrate this day in peace. Zübeyde Zümrüt, BDP Diyarbakır provincial chairperson, referred to Nevruz in 2013 as a "milestone" for both Turkey and the Middle East as she announced the Nevruz 2014 schedule. Noting that fires have already been lit in various neighborhoods, a sign associated with Nevruz to celebrate the beginning of spring, Zümrüt said Nevruz celebrations have significance in the history of the region and symbolize brotherhood. "Nevruz, which has been celebrated for thousands of years, is a symbol of resistance, struggle and freedom in this century in the Kurdish geography. It is a sign that one can exist despite denial. It is the name of resistance against tyranny and it signifies the road toward freedom. It is where the nation meets for an honorable life," added Zümrüt.

The celebrations this year will include surprise artists. Prepared in four languages, the invitations have been sent to more than five thousand people including the leader of the Kurdish Regional Government (KRG), Massoud Barzani, AK Party officials and opposition members. This year's celebrations will welcome representatives of political parties, parliamentarians, diplomats, academics, activists and both local and foreign journalists from around the world.

The main celebrations will again take place in the district of Amed in Diyarbakır. Whether the celebrated Kurdish artist Şivan Perwer, who visited Turkey for the first time upon the invitation of Prime Minister Recep Tayyip Erdoğan since his exile in 1976, would attend this year's celebrations is still a mystery as his name was not on the guest list. "We are still working on the list of guests. We will share the list with the press once it is finalized. We have sent an invitation to Şivan Perwer, however, we are still discussing the issue. A very crowded committee from Rojova will also attend the celebrations," said Zümrüt.

Guns were silenced for last year's celebrations, marking a new era in history. Abdullah Öcalan, founder of the outlawed Kurdistan Workers' Party (PKK), who is serving time in İmralı Prison, wrote a five-page message stating that the weapons had to be dropped and the militant forces in the region withdrawn. "Ideas and politics should replace weapons," said Öcalan. The ceasefire process commenced on May 8, 2013.

Despite a few disruptions, the militant forces agreed with Öcalan's call to lay down the arms and pulled out of the region to outside Turkish borders. Öcalan wrote a new letter to mark this year's celebrations, which will be read on Friday. Like last year, the letter will be read in both Turkish and Kurdish and is expected to mention the transition from armed resistance to democratic negotiations and politics, as well as announce the road map for the coming year.

The celebrations in Diyarbakır will also welcome Turkey's Black Sea region's famous music band Karmate, along with Armenian bands. In Şanlıurfa, also in southeastern Turkey, the famous Kurdish rock artist Ciwan Hoca will take the stage. Celebrations took place yesterday in Azerbaijan marking one of Azerbaijan's biggest national holidays, Land Wednesday. According to Azerbaijani traditions, in order to mark the coming of the spring and celebrate Nevruz, they hold celebrations and special events on four Wednesdays, for "land, fire, water, air," lighting fires and dancing around them.

Nevruz is also celebrated by various countries in the Middle East and Central Asia, including Afghanistan. Nevruz was also included in UNESCO's 2009 List of Intangible Cultural Heritage with the efforts of the ministry. The General Assembly of the United Nations announced March 21 as the "International Day of Nowruz."