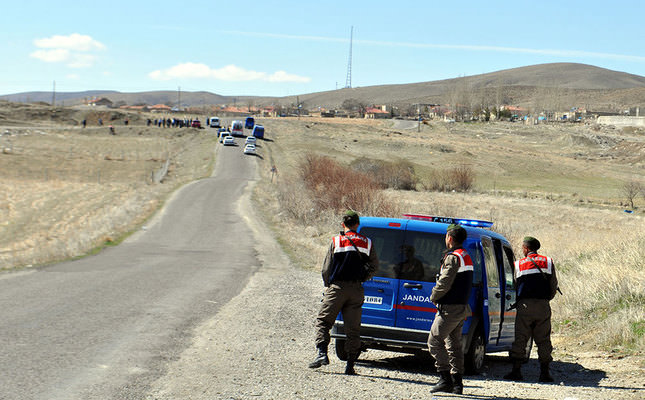 A policeman and two soldiers were killed when three gunmen opened fire on security officials at a checkpoint in the central Turkish province of Niğde yesterday. Two gunmen were captured at the scene while another fled.

The victims, two noncommissioned officers from the local gendarmerie force and a traffic policeman, were manning a checkpoint in the Ulukışla district of Niğde at the time of the attack. When they attempted to stop a van at the checkpoint on the road between Niğde and the southern province of Adana, occupants of the van opened fire. Two troops and a policeman died at the scene.

Special units from Turkish police and gendarmerie forces pursued the assailants following the attack. Abandoning their van, the suspects hijacked a truck and later took people in a nearby clinic hostage.

Two suspects were captured in a Special Forces operation while another managed to flee.

A bus passing by the checkpoint during the attack was caught in the crossfire. A man in the bus was slightly injured.

No one has yet to claim responsibility for the attack

The motive of the attack and the identity of the perpetrators have not yet been revealed. Terror attacks have been rare in Turkey both this and the previous year after the terrorist organization Kurdistan Workers' Party (PKK) announced a ceasefire.

Though no one claimed responsibility for the attack, the deadliest targeting security forces in recent history, the PKK is known for its attacks against the army and police. However, a Turkish police directorate earlier this week issued a warning to its local branches against possible attacks by the terrorist organization the Revolutionary People's Liberation Party/Front (DHKP-C).

The DHKP-C, a radical leftist group, is designated a terrorist organization in Turkey and responsible for carrying out various attacks including last year's rocket attack on the AK Party headquarters and a suicide bombing incident at the U.S. Embassy in Ankara. The United States and the European Union also recognize the DHKP-C as a terrorist group. The warning issued to all units said DHKP-C may target the prime minister, ministers, lawmakers, police officers and soldiers. NİĞDE / AA
Last Update: Mar 20, 2014 5:12 pm
RELATED TOPICS