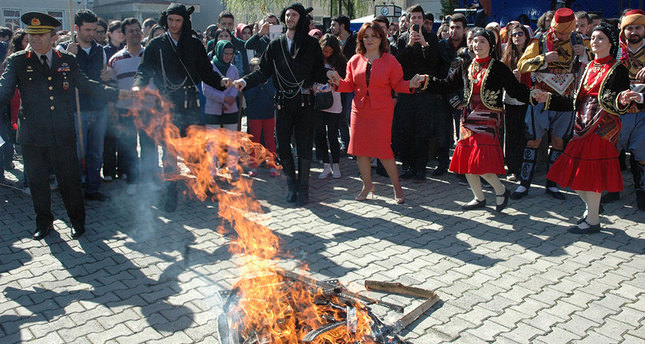 The last day of Nevruz was celebrated in the southeastern city of Diyarbakır with great enthusiasm. Compared to previous celebrations, this year's festivities displayed unity and brotherhood across the country

ISTANBUL — Despite previous celebrations having been shadowed by violence and conflict, this year's Nevruz celebrations in Turkey, Iran, the Kurdistan Regional Government (KRG) and Turkic states, were the most peaceful ones yet.

The positive outcome of the reconciliation process between Ankara and the Kurds was seen in Diyarbakır with "Happy Nevruz" banners in 10 different languages. Police forces and intelligence officials worked to prevent provocations or unrest.

As the celebration was marked as the most historic Nevruz in Turkey's history, messages of peace and unity echoed in the region.
A letter of celebration written by the PKK leader Abdullah Öcalan was shared with the masses that gathered for the festivities. Sending his best regards, he expressed his wishes to maintain peace in the country.

Denouncing the Gülen Movement, which infiltrated the police and judiciary with the aim of overthrowing the government and eroding the reconciliation process between Ankara and the Kurds, Öcalan said, "We will shatter all the procoup mindsets, these byroads [coup attempts] are over now. Do we continue with iterative coups or democracy? This is the question." "We extinguished the fire of conflict and lit the fire of peace last Nevruz. This process was to establish a dialogue. Both sides tested each other's sincerity during this period. Even though the government was slow to take action, both sides displayed firm stances, but a legal framework is inevitable now," Öcalan continued.

Referring to the Gülen Movement's Feb. 7 operation against the Turkish intelligence agency and its chief, Hakan Fidan, who is the leading actor of the Oslo talks that brought the Turkish government and PKK to the negotiating table in 2012, Öcalan said, "Our peace journey has come under attack, but you [Turkey's citizens] will give this dirty game away and erode the international gladio."

A visit in March by Öcalan's brother, Mehmet Öcalan, fuelled allegations that Abdullah Öcalan, who is sentenced to life imprisonment in İmralı Island in Turkey, is not satisfied with the course of the reconciliation process. The determination of both sides in their stance refuted those allegations.

Turkish Prime Minister Recep Tayyip Erdoğan has continuously echoed the government's sentiments by saying that the peace process is continuing at full steam. Referring to the Gülen Movement, Erdoğan noted in his speeches that any move of those kinds of organizations with the aim of discrediting the reconciliation process is not allowed.

Since the beginning of the process in early 2013, Turkey's citizens praised attempts to end Turkey's long-standing conflict with the Kurds. Last year marked the year that no soldiers were killed, as there were no PKK attacks. The democratization package approved in early March has also expedited the process by introducing broader political rights, education in native languages, harsh sanctions against hate speech and the reinstating of the former non-Turkish names of villages and neighborhoods.

Critics say certain Kurdish political figures may not be satisfied with the legislations included in the package, but conservative Kurds are happy with the efforts of the ruling AK Party. Apart from the democratization package, the AK Party has continuously increased its investment in eastern Turkey with the aim of meeting the necessities of the region, which has been left behind due to conflict and terrorism in the region.

According to the latest figures, the eastern cities of Turkey received the lion's share of investment during the AK Party's rule. In sharp comparison to the past, eastern Turkey saw the construction of airports, educational and technological developments and improved transportation facilities. These developments are praised highly by the region's residents who still remember when the country's east lagged far behind western Turkey.

Contrary to previous Nevruz celebrations, the end of the conflict that killed so many people, the investment in the region and new democratic legislations paved the way for this year's traditional Nevruz celebration. Turkey's President, Abdullah Gül, praised the peaceful celebration with a message.

Describing Nevruz as the symbol of unity and brotherhood, Gül said, "Regardless of ethnic origin, race, language, religion or political views, Turkey's citizens gave one of the best examples of living in peace and unity."

Gül highlighted the significance of the core values of Nevruz and said, "Everyone living in this country has equal rights. We [Turkey's citizens] are an indivisible whole and we will live in peace as we did a thousand years ago."

Accepted as the representative of the political Kurdish movement in Turkey, the Kurdish-based Peace and Democracy Party's (BDP) Diyarbakır incumbent and Şanlıurfa mayoral candidate Osman Baydemir gave a speech in both Turkish and Kurdish. Referring to the killings during the years of conflict in the region, Baydemir said, "There has been no funeral news in Amed [the Kurdish name for Diyarbakır], Istanbul, and Hakkari. We will leave the legacy of peace and brotherhood to our descendants. We will never desist from democracy."

While messages of peace were given during the celebration, Diyarbakır's economy was also given a boost by tourists visiting for the festivities. Nineteen hotels in the city with a capacity of 2,136 beds were fully booked and about 2,000 residents were asked to officially host guests.

It was reported that nearly 600 guests, including Hero Talabani, the wife of Iraqi President Jalal Talabani, high representatives from Europe, South America, the Kurdistan Democratic Party (KDP), parliamentary committees from Spain, Germany, Iceland and Ankara, diplomatic representatives from Belgium, Holland, Denmark, France, Italy, Switzerland and the U.S. attended the celebration. More than 350 journalists from Turkey and abroad visited Diyarbakır to report on the celebration.

Speaking at a local election rally in the northeastern cities of Rize, Artvin and Erzurum, Turkish Prime Minister Recep Tayyip Erdoğan commented on Nevruz, an age-old celebration signifying the start of spring: "Happy Nevruz to Turkic and Muslim states. I hope the spring of Nevruz will be permanent and those who fired the light of peace will not exploit it."

Referring to the Gülenist infiltration of the police and judiciary with an aim to overthrow the legitimate government, Erdoğan said no one could transfer the people's rule to the elites. He added that the people of Turkey were the ones who gave his party the authority to rule and they again are the only ones that can take it back. "We have not discriminated against any segments of the society or regions of our country. There are some groups lobbying against the AK Party, in fact, to impede Turkey's development," said Erdoğan.

Stating that they would not let the will of people be stolen by nondemocratic means, Erdoğan said, "We will not leave the power as long as people support us." Erdoğan also slammed the U.S.-based controversial imam Fethullah Gülen. "He calls the prime minister of Turkey a 'traitor'," said Erdoğan. "He remained silent when children were killed in Palestine, when Gaza was bombed, when more than 150,000 people were killed in Syria, when people were burned in Myanmar, when young people were killed in conflicts in the eastern regions of Turkey, when the imam-hatip schools - a vocational school to train state employed imams - were closed, and when wearing hijab was banned in universities."

Erdoğan further criticized opposition parties, the Republican People's Party (CHP) and Nationalist Movement Party (MHP).
The prime minister pointed out CHP leader Kemal Kılıçdaroğlu claimed that he would resign if he could not get around 40 percent of votes in the 2011 general election. Despite failing to reach his target he is still leading the party. Erdoğan said that the MHP leader had been at the head of the party for 17 years but had lost all elections since. "But from here, I give my word to all the people of Turkey, if my party does not come first in the local elections, I am going to resign," Erdoğan said.