"Let's do it" for a cleaner Turkey 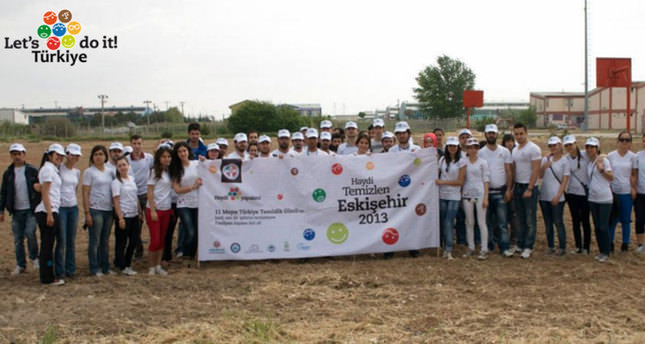 With more than nine million volunteers across the globe since it was founded in 2008, the Let's Do It! Turkey campaign is expanding to all cities of Turkey for the first time

ISTANBUL — There's too much garbage in the world and we all know it. So do the nine million volunteers who have participated in the Let's Do It! campaigns worldwide. First started in Estonia, the campaign has spread to 110 countries within just eight years. This year, the Turkey event will take place on May 10 with the aim of cleaning the whole country of "illegal garbage" within just hours since all Turkish cities will be included in this year's efforts.

The idea is simple: make cleaning up fun and create a sufficiently groovy vibe, thus mobilizing huge numbers of people to clean up massive amounts of illegally dumped garbage - all in one day. Turkey joined the campaign in 2012. Let's Do It! Turkey is organized by a group of volunteers and as part of a global civil movement initiated in 2012. The first event in Turkey took place on May 12 in five locations.
More than 1,300 people attended the cleanup and more than 13 tons of garbage were collected off the streets.

This year, the organizers are striving hard to find ways to promote the event in order to reach a million volunteers and achieve a level of success that no other country has yet accomplished.

The first five locations in 2012 were the Princes Islands and Üsküdar district of Istanbul and Burdur, Mudurnu and Amasya. In 2013, the Turkey cleanup secured the participation of the following 16 cities:

Other successful locations were Eskişehir with 400 volunteers, Burdur with 320 and Bingöl with 300 volunteers.

The campaign aims to unite people who not only want to live in a better, cleaner world but who are actually determined to take action and go the extra mile. The campaign's main message is based on the belief that local communities can create the change required to make the world a better place and can actually make their voices heard if they unite and work together. The most significant characteristic of the initiative is promoting unity and bringing communities together through a sense of empowerment.

The idea for the Let's Do It! movement was generated in the small Baltic country of Estonia. On May 3, 2008, 50,000 people were out on the streets picking up waste that was illegally dumped or thrown on the streets of their own towns and cities. Within five hours, Estonians managed to collect 10,000 tons of waste. The video report went viral and soon afterward one country after another joined in and organized one-day cleanup events under the same slogan of "Let's Do It!"

So let's do it. Let's join the movement on May 10 to make Turkey, our streets, our town, our country and our world a cleaner place!