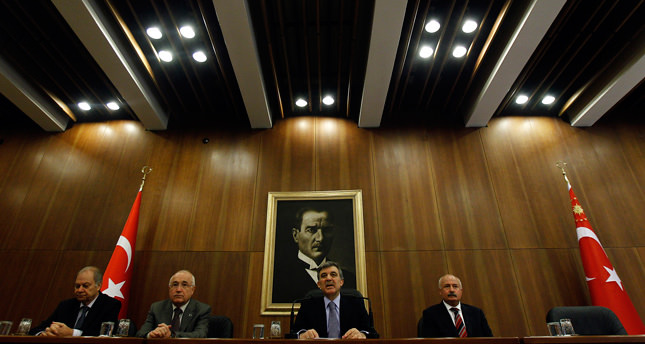 by daily sabah Mar 24, 2014 12:00 am
ANKARA — President Abdullah Gül issued a statement on Monday, announcing that the Turkish Air Force protected Turkey's border successfully on Sunday, when a Syrian jet violated Turkey's airspace, however the Turkish Armed Forces are still on high alert a day after the incident in which a Turkish F-16 was forced to shoot down the plane after it failed to heed numerous warnings.

President Gül commented on the incident in a statement on Monday, in which he stated, "Turkey has done what is necessary in accordance with the previously announced rules of engagement."

Two Syrian MIG-23 fighter aircrafts approached Turkey's airspace along the Turkish-Syrian border at around 13:00p.m. on Sunday. After the Turkish Air Force issued four warnings, one of the planes diverted its course back to Syria, while the other failed to comply to repeated warnings and violated Turkish airspace. A Turkish F-16 fighter jet shot down the plane, which landed in the Syrian border town of Kasap, according to a statement issued by the Turkish Chief of Staff.