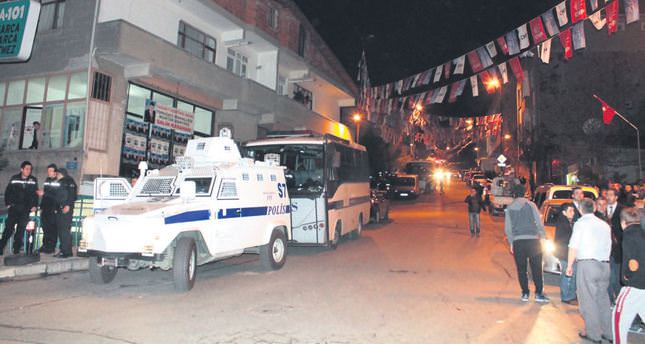 Islamic State of Iraq and the Levant (ISIL) emerged as a new threat against Turkey's security after its alleged members' deadly attack against security forces in central Turkey and recent police operation in Istanbul, targeting the group

ISTANBUL — Assailants also killed a driver before hijacking his truck. The suspects fled the scene, but they were captured after two days. They spoke Arabic, according to eyewitnesses, but a grimmer picture emerged concerning the identity of the suspects later.

They were Albanians living in Germany and Switzerland and were allegedly returning from Syria after fighting there against the Assad regime. In their interrogation, the suspects branded Turkish officials who arrested them as "infidels" and said they had acquired "thawab" - an Islamic term for spiritual merit or reward that accrues from the performance of good deeds and piety - by killing the soldier and policeman.

Turkish authorities did not confirm that the three men, in their early 20s, were members of ISIL. However, their backgrounds fit the profile of people from European countries who flock to Syria to fight the Assad regime.

Most of them join ISIL or similar radical groups, which in the absence of a state authority in Syria, attempt to establish their own authority, instead of fighting alongside the rebels of the Free Syrian Army (FSA). Six people were captured in the southern Turkish province of Kilis, bordering Syria, two weeks ago, as they attempted to cross into Syria to join ISIL.

Media reports claimed that the suspects, travelling from the Turkish border province of Hatay to Istanbul, would carry out assassinations in the name of ISIL. A cache of automatic weapons and a large amount of munitions were found in possession of the suspects.

Late Tuesday, Turkish police launched raids in Istanbul to find ISIL members with whom the suspects in the Niğde attack were supposed to be in contact. Three people, including two Azerbaijani nationals, were arrested in one of the raids. In another raid in Istanbul's Ümraniye district, suspected ISIL members, a married couple, opened fire on police. Three police officers from the counterterrorism unit were injured, and the two suspects were captured.

Interior Minister Efkan Ala said yesterday that the two injured people captured in Istanbul were suspected of having links to "terrorist groups in Syria." "The people we call 'terrorists' are injured and are under medical observation. They are trained in Syria," Ala said yesterday. The minister confirmed two people were captured in the operation carried out as a result of intelligence gathering.


ISIL, fighting with the FSA of the opposition in some parts of Syria, threatened Turkey last week. The group surrounded a Turkish enclave in Syria where a small number of soldiers from the Turkish Army are deployed to protect a historical tomb.


Most of them are foreigners. ISIL militants are concentrated in the northern provinces of Syria bordering Turkey, as well as eastern Syria. Initially, they were involved in suicide bombings targeting regime forces, but their relations with other factions opposing the Assad regime became tense as the opposition forces became divided over the past three years.


Professor Mesut Hakkı Caşın, an expert on international relations and Middle East, told Daily Sabah that the ISIL was an organization "more dangerous and radical than al-Qaeda." "It is apparently based in Northern Iraq and Syria where a stable state do not exist and a conflict is underway. The ISIL is active in the regions where security is weak. For instance, they cannot operate in other countries in the region such as Jordan or Israel where the security is high," he said.


Caşın noted ISIL was likely supported by various countries and those countries' intelligence services. "They suddenly emerged as a new terrorist organization and their number is growing.


They recruit people from South Caucasus, Chechnya, North Africa, Balkan countries amid others. They also recruit from Turkey.
ISIL is a direct threat to Turkey in terms of the regime and the state," he added.

On why ISIL targeted Turkey, Caşın said they had a number of reasons to threaten Turkey. "For one, they sought to destabilize Turkey ahead of local elections. I believe, based on weapons they possess, they could carry out an attack at Prime Minister's rally in Istanbul on Sunday if they could reach the city," he said. "Turkey, through a series of operations, rendered al-Qaeda ineffective to a large extent and exerts efforts to prevent an al-Qaeda threat from Syria. This angered ISIL and they look to retaliate," he added.

Professor Caşın said that Turkey's efforts to eradicate al-Qaeda threat helped country to cement its image as a secular country against al-Qaeda and ISIL's marginal interpretation of Islam.

He noted that ISIL's threats against Süleyman Şah tomb where Turkey has an extraterritorial jurisdiction, clearly indicates the group's hostility towards Turkey. In this context, ISIL may serve to the interest of the Assad regime. "Süleyman Şah tomb is Turkish territory according to the Ankara Agreement. If Syrian army entered there, this would be casus belli. But instead of doing that, the Assad regime may use ISIL as it used Kurdistan Workers' Party (PKK) in the past against Turkey," he said. Caşın said ISIL might be employed by the Assad regime in the wake of rising tensions between Syria and Turkey after Turkey shot down a Syrian fighter jet.

The professor stated that Turkey should step up measures against ISIL "both on land and sea border." "Turkish Army and the intelligence service should carry out preventive intelligence activities against ISIL," he said. "ISIL recruits are brainwashed. They have a strong anti-Turkish stance. Turkey should raise awareness against the true nature of this organization to prevent Turks to join ISIL's
ranks," he added.
Last Update: Mar 26, 2014 11:56 pm
RELATED TOPICS