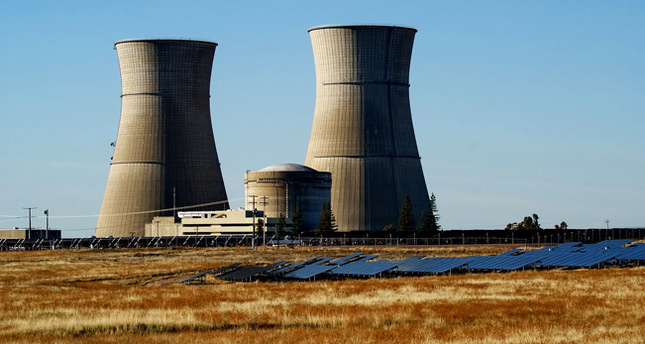 by AA Mar 26, 2014 12:00 am
THE HAGUE, Netherlands — Nuclear energy is a must for Turkey, says President Gül, adding Turkey needs nuclear energy to reduce dependence on foreign energy supplies. Abdullah Gül, president of the Turkish Republic, attended the Nuclear Security Summit (NSS) in Hague. During the summit, Gül highlighted Turkey's need for nuclear energy as a means to provide for its energy consumption, which is constantly increasing. In his speech Gül said: "Turkey needs nuclear power plants (NPP) to diversify its energy resources, as its economy continues to grow rapidly. Turkey is currently developing legislation and applications in regards to nuclear security."
During the summit, experts discussed the future of nuclear energy and its possible negative effects on nature and human life. After a detailed discussion, experts said the economic benefits of nuclear energy are greater than its risks. According to Akira Tokuhiro, professor of mechanical and nuclear engineering at Idaho University, who spoke on Monday, despite nuclear energy being a high hazard industry, the rewards outweigh the risks. "If a [country] develops a nuclear energy sector, it joins a 'membership of nuclear energy nations,' which is an elite list of nations," he added. He explained that nuclear power plants help reduce foreign deficits and generate employment, while also guaranteeing uninterrupted and cheap energy for heating, cooling and lighting.
The reliability, availability, lower costs and environmental damage of nuclear energy far overshadow the death toll stemming from nuclear accidents, according to Bill Garland, nuclear energy professor at Canada's McMaster University. "If people thought critically about energy options, they would likely conclude that nuclear energy should be part of the mix."
Turkey relies heavily on foreign energy resources such as natural gas and oil, which account for almost half the electricity production in the country at an annual cost of up to $60 billion. The government aims to curb the reliance on energy imports. Turkey's first NPP is being built by Russian state company Rosatom in Akkuyu, on the Mediterranean coast, and will be fully operational by 2023.
Turkey also plans to build a second nuclear plant in the port city of Sinop on the Black Sea coast with a Franco-Japanese consortium.

After negotiations with Japan, there was speculation that Turkey could have access to enriched uranium, which may be used in nuclear weapons.
Thirty-five countries including Turkey have pledged to integrate international guidelines on nuclear security into their national laws in order to prevent nuclear materials from falling into "terrorist hands."
The countries, including Israel, Kazakhstan, Morocco and Turkey – but not Russia – voiced their commitment to "realize or exceed" standards set out in guidelines established by the International Atomic Energy Agency (IAEA) to safeguard nuclear materials, in a joint statement issued on the sidelines of the third biennial NSS, which was held at The Hague on Tuesday.
In line with an initiative pioneered by host nations the Netherlands, the United States and South Korea, the 35 states will open up their security procedures to independent supervision, a further step toward creating an overarching international legal framework described as being designated to prevent nuclear material from falling into the wrong hands.
Dutch Foreign Minister Frans Timmermans underlined that nuclear security had to remain a "national responsibility," but pointed out that closer international cooperation would be "a direct contribution to the efforts towards preventing nuclear material becoming a security risk."
Despite being hailed as a key development, there are still concerns that not all countries out of the 53 that attended the summit had signed up, especially Russia, with its substantial stockpile of Soviet-era weapons.
U.S. President Barack Obama, who spearheaded the initiative, has targeted nuclear control as being one of the figurehead foreign policies of his administration, claiming nuclear terrorism was "the most immediate and extreme threat to global security."
Last Update: Mar 26, 2014 5:38 pm
RELATED TOPICS