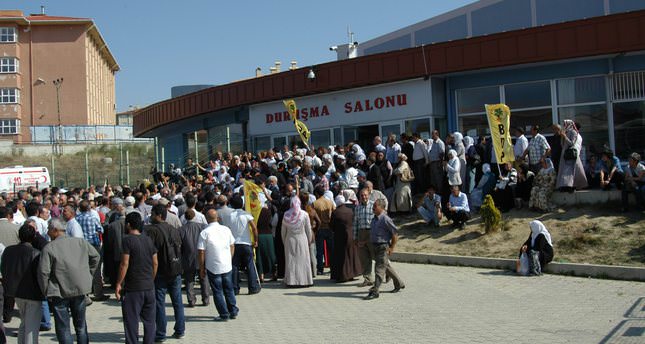 Turkey released 45 suspects in two lawsuits against the Kurdish Communities Union, a branch of the terrorist Kurdistan Workers’ Party. The releases came after the abolition of specially authorized courts and the implementation of restrictions on pre-trial detentions

ANKARA — The trial of alleged KCK members was launched in 2011 after Turkish security forces rounded up 204 suspects in a wave of detentions in Istanbul. 77 people were de- tained out of 204 suspects and were tried by a specially authorized court investigating the terrorism-related crimes. In another trial, 15 out of 46 suspects detained were being de- tained. Journalists working in pro-KCK media outlets were in the dock in this second trial. After Turkish President Abdullah Gül signed a bill abolishing Special Authority Courts (ÖYMs) earlier this month, the 41-year-long practice of special trials, often on terrorism cases, was lifted. Following the bill's ratification, defense teams for KCK suspects appealed to a high criminal court for the defendants' release.
The releases came late Wednesday. The court issued the ruling on the basis of detention periods of defendants and "a change in the classification of offense," which is, existence of tangible evidence that proves the defendants' innocence. Amid the released KCK suspects are Semiha Alankuş, a reporter for Dicle News Agency (DİHA), Nevin Erdemir, Kenan Kırkaya, Mazlum Özdemir, editors and reporters for Özgür Gündem daily. They were accused of being members of an "urban wing" of the KCK. Pınar Tarlak, a manager at the Istanbul branch of Peace and Democracy Party (BDP), Mehmet Tayyip Arslan, chairman of BDP's Esenler district branch and other district branch officials of BDP in Istanbul were among the released defendants in the other trial focused on politicians accused of KCK membership. Earlier in March, nine lawyers and a writer, arrested as part of KCK trials, were released.

Meanwhile, another case against KCK in the southeastern province of Diyarbakır continues. The 2nd High Criminal Court in Diyarbakır rejected defendants' request for release in that case. The Diyarbakır court rejected the plea on the grounds that PKK/KCK were "still active" and "released defendants may disappear by joining PKK members hiding out in mountainous territory in the Northern Iraq."

Terrorism-related trials are handed to high criminal courts after abolition of ÖYMs. Releases in similar cases are sometimes hindered depending on judiciary evaluation of the cases by different courts. District mayors and local politicians are among the defendants in the KCK trial in Diyarbakır. In regard to the recent releases, Yılmaz Ensaroğlu, the director of the Law and Human Rights Division at SETA Foundation and member of the "wise men commission" that facilitated the reconciliation process, said the releases would contribute to the peace process.

"The recent releases will definitely have a positive impact on the psychology of the Kurdish population and politics. A continuation of the releases will be seen as the government's commitment and dedication to the process. However, the continuing detention of mayors and local politicians is a problem that should be resolved quickly," he said, referring to the Diyarbakır trial.
Journalist Oral Çalışlar shared similar sentiments. "Even though I consider the latest re- leases a positive step, I have to say that it's not enough. It is unfair and a double standard that despite the release of officers involved in the Ergenekon trial and those controversial figures that have links to extrajudicial atrocities in southeastern Turkey, these people are being refused release due to their alleged links to a broad definition of terrorism. Legally elected mayors are still in prison and this cannot be explained in any way. Their release is of the utmost importance," he said. The detention of mayors was also criticized by the Congress of Local and Regional Authorities, a subsidiary of Council of Europe.

According to a report from the Congress that was published yesterday in Strasbourg, some 15 mayors, 23 deputy mayors and dozens of municipal councilors have been detained for years by the country's authorities. The report said mayors "should enjoy the same protection under Turkish law as national members of Parliament." The report also called for the release of Leyla Güven who was mayor of Viranşehir in Şanlıurfa province and who has been on trial since 2010, "with no end to her trial in sight."

Reports confirm that as a result of a recent Turkish Constitutional Court ruling, all the members of the Turkish Grand National Assembly who had been detained in similar circumstances were freed, and for the same reasons Güven should be freed. "Following the Dec. 4, 2013 ruling of Turkey's Constitutional Court in the Mustafa Balbay case, ordering his release on the grounds that his remand detention was excessive and unlawful and that his right to be elected had been violated, the Turkish courts have now released all five members of parliament who were detained in similar circumstances," the report states, referring to journalist Mustafa Balbay, elected as lawmaker and imprisoned in the Ergenekon terrorist organization case.

The KCK is regarded by prosecutors as a branch of the terrorist organization attempting to reshape the organization of its followers in the cities to disseminate pro-PKK propaganda and carry out armed attacks in the cities. PKK leadership claimed that the KCK case was a plot by prosecutors and police chiefs linked to the Gülen Movement to imprison Kurds and derail Turkey's reconciliation process to resolve the Kurdish question. The Gülen Movement, led by controversial imam Fethullah Gülen, is waging a defamation campaign against the AK Party with which it was one allied. The PKK has been involved in attacks targeting Turkish security forces and civilians that killed tens of thousands of people in three decades. In 2012, the government announced a reconciliation process in a move to restore the rights of the neglected Kurdish community and end PKK terrorism. Following the announcement, the PKK responded with a "withdrawal" from Turkish territories and terror attacks significantly decreased, although the organization remains active.
Last Update: Mar 28, 2014 1:24 pm
RELATED TOPICS