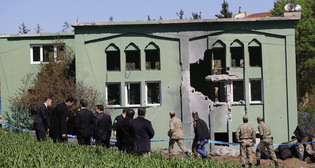 by Ihlas News Agency Mar 31, 2014 12:00 am
HATAY — At approximately 14:00 pm on Monday, three shells and one rocket from Syria fell into Turkey's bordering Yayladağı district, located in the southern province of Hatay.

While the rocket hit a mosque in the district center, stray shrapnel that came down in the vicinity wounded a Syrian woman.

The district of Yayladağı is situated across the border from Syria's Kasab region, which has been the site of heightened conflict between the Assad regime's troops and Free Syrian Army forces.

The stray shells landed in a rural region in Güzelyurt Village, while the rocket destroyed the wall of a mosque located across from a tent-city accommodating Syrian refugees. Luckily enough, a prayer session was not underway when the rocket crashed into the mosque. Police and gendarmerie teams have begun a widespread investigation into the incident.