Turkey to curb adoption of Turkish children in Europe 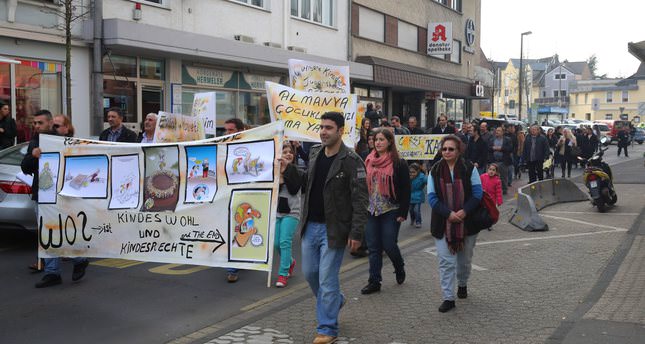 ISTANBUL — About 5,000 Turkish children have been removed from their biological parents across Europe over the years and placed in German foster homes, much to the chagrin of families who claim their children are then raised as Christians.

In the past few years, reports of such adoptions caused serious backlash in Turkey, with Prime Minister Recep Tayyip Erdoğan severely criticizing the practice.

The Turkish government is stepping up efforts to restrict this number as it plans to encourage Turkish families living abroad to adopt Turkish children to preserve their cultural identity. The Ministry of Family and Social Policies is attempting to popularize the concept of foster families among Turkish families living in Europe in order to reduce the number of Turkish children adopted by non-Turkish or non-
Muslim families.

In an interview to Anadolu Agency, Minister Ayşenur İslam said the Turkish Parliament recently passed a package bill enabling the opening of ministry offices abroad, adding, "We plan to encourage Turkish families in Europe to adapt to the practice of fostering and decrease the number of children adopted by non-Turkish parents as much as possible. Foster family practice is not popular amid Turks in Europe. We will set up offices at embassies and other representative offices of the Turkish government to encourage adoption."

İslam noted that the foster family concept has become successful in Turkey thanks to the ministry's efforts locally and its implementation of the same project in European countries.

Preserving the cultural and religious identity of the Turkish community abroad is what underlies Turkey's struggle to keep children with Turkish families. The government mobilized diplomatic efforts last year after the story of nine-year-old Yunus made headlines. The Turkish boy was adopted by a lesbian couple in the Netherlands. He was removed from his biological parents after he was injured when his Turkish mother accidentally dropped him on the floor when the boy was six months old.

Dutch social services claimed the mother did not properly care for the child. Yunus' family claimed the boy was confused about "family values because of [his] same-sex parents and was frequently taken to church."

Umut Yıldızı or Star of Hope is a nongovernmental organization based in Germany to help Turkish families foster Turkish children.
Kamil Altay, the organization's director, says 551,592 children were placed in the protection of social services between 1995 and 2012. The number of Turkish children in that statistic is not known. He said the NGO initiated projects to help children "who forgot their inherited culture and language."

Through the organization Ailenizde Bana da Yer Var Mı? (Do you have a place for me in your family?), Umut Yıldızı tries to promote fostering among Turkish families in Europe, helping them though every step of the adoption process. "[W]e help those children not to lose the core values of Turkish society," Altay said.

He notes that at least 3,000 children were placed under the care of social services in Germany and most of them are handed to German foster families. "Some of them, at the age of five or below, do not speak German and have difficulty to adapt to the new family. They can't even say they are hungry as they do not speak German," he said.

According to Altay, Turkish Deputy Prime Minister Bekir Bozdağ, former Minister of Family and Social Policies Fatma Şahin, as well as Turkish diplomats, consul-generals and ambassadors helped Umut Yıldızı with their work, though the situation of Turkish foster children still remains dire. "Children of Turkish families born in 2000 and later are recognized as German citizens. So, it is difficult to obtain information about Turkish children placed under state care," he said.

Altay appealed to Turkish Prime Minister Recep Tayyip Erdoğan, who first launched the efforts to promote fostering among Turks abroad, to follow up on the initial efforts. "Ours is a small-scale NGO working to solve the problems of about 150,000 Turkish children, half of them with German foster families and half of them in orphanages. As we work to relocate those children to Turkish foster families or reunite them with their biological parents, we face difficulties within German bureaucracy. We hope the prime minister may help us through, leading efforts on a government level for the relocation of those children," he said.

With the NGO's joint work with Turkish government agencies, social services officials will be assigned at Turkish embassies in Europe to help families on the matter and other social services issues. "It has been late but still, it is a progress," Altay noted.

Social services at the embassies and consulates will advise Turkish families on how to adopt Turkish children and give legal advice to families whose children are with German foster families.

Still, Altay says a greater unity among Turkish nongovernmental organizations in Europe is needed to achieve progress. "If we can achieve this sense of unity and can get the finances needed to help those children, we will be able to curb the adoption, and moreover, help other disadvantaged Turks in Europe such as the disabled and senior citizens. We need more coordination between the Ministry of Foreign Affairs and NGOs," he stated.

On the German community's reaction to Turks' opposition to foster families, Altay said Germans are not well informed on the issue and German media outlets tend to downplay it. "We are trying to resolve this issue without hurting friendly relations between Germany and Turkey," he said.