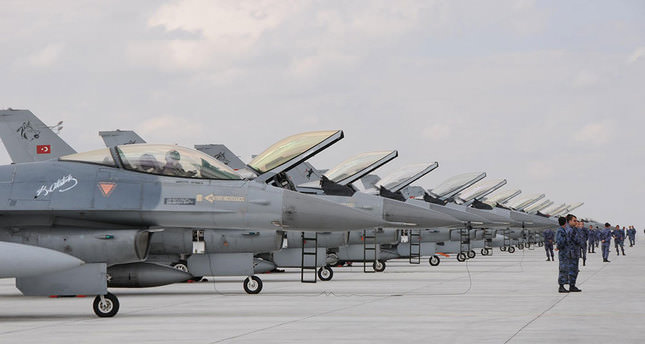 by daily sabah
Apr 07, 2014 12:00 am
ANKARA — The Turkish army is preparing to launch a naval and land exercise on Monday. The major exercise comes amid tensions with Syria and a changing map in Ukraine, both in close proximity and of geopolitical importance to Turkey. The Turkish Air Force's 11-day military exercise, nicknamed Anadolu Kartalı (Anatolian Eagle), will commence on Monday in the central Turkish province of Konya.

The exercise, whose previous edition was joined by air forces of other countries, will be entirely domestic this year. Turkish fighter jets and other components of the air force will be showcased in the exercise. Last year, 48 warplanes including F-16 and F-4 fighter jets took part in the exercise. The purpose of the exercise is to minimize casualties in a warfare scenario. This latest edition is particularly important in terms of exhibiting Turkey's military might in aerial warfare in the wake of rising tensions with Syria. Turkish fighter jets shot down a Syrian military jet in March after it violated Turkish airspace, according to the government. This came one year after a Turkish F-4 aircraft was shot down over the southern Mediterranean Sea by Syrian missiles for alleged violation of Syrian airspace. Turkey has changed its rules of engagement with Syria, declaring all Syrian military units approaching the lengthy shared border as a threat and military target. Syria has continued to harass Turkish jets since its MIG-23 jet was shot down. Syrian missile systems keep being locked in on Turkish jets for increasing lengths of time on an almost daily basis.

Anadolu Kartalı will also be a testing ground for fighter jet response times to security threats and cross-border operations.

This bears importance after threats by some Syrian factions against a Turkish enclave in Syria last month. After a group affiliated with the Islamic State of Iraq and the Levant (ISIL) issued a threat against Suleiman Shah tomb, a Turkish territory within Syria guarded by Turkish troops, Turkey readied a plan to eliminate any attacks to the enclave within minutes by dispatching fighter jets to Syria.

First introduced in 2001, the exercise is sometimes held with the participation of air forces from other countries, including the United States and Israel, though the latter has not participated since 2009 after relations between Turkey and Israel became strained. Another exercise in the shadow of regional tensions is Deniz Yıldızı (Sea Star), the Turkish navy's military exercise in the Sea of Marmara and Black Sea.

The five-day exercise, though planned months ago, comes at a time when Russia and Ukraine remain at odds over secession of the Crimean Peninsula, a major gateway to the Black Sea and Mediterranean for the Russian navy. Turkey, which has friendly ties with Russia, refused to recognize a referendum that annexed Crimea to Russia. The international community - the United States in particular - raised concerns over Crimea's annexation.

Frigates, corvettes, assault boats, minehunters, submarines, helicopters and jets will take part in the exercise. One of the objectives of the naval exercise is the testing of guided missiles.

The exercise's main scenario will be the Turkish navy's warfare preparedness. The exercise was cancelled last year after the admiral who should have commanded the military units and several naval commanders stood trial in a military espionage probe.
Last Update: Apr 07, 2014 1:18 am