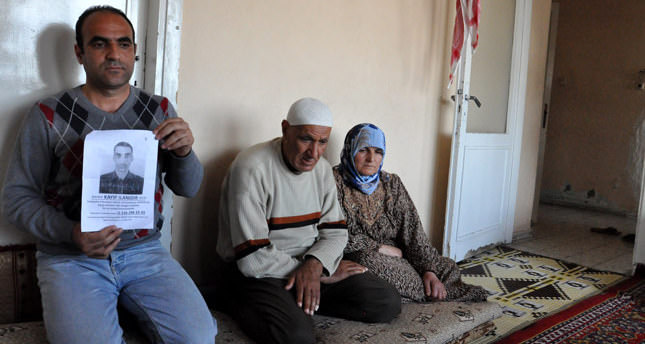 by AA
Apr 09, 2014 12:00 am
HATAY, Turkey — Taking shelter in Turkey after fleeing from the civil war, Syrian Zeyno family looks for their son who has been unaccounted for since he vanished early February from Hatay.

The disappearance of 33-year-old Osame, who needs to take medication for his mental health, has added to the tragedy of Zeyno family who left their homeland and family behind one and a half years ago in Syria.

The father, Abdulhamit Zeyno told an Anadolu Agency correspondent, as he burst into tears, that his son is nothing less than a child and has to take medicine for his health. He maintains that his son needs himself and his mother because of his mental illness. The father pleaded for help from Turkey and the Turkish people, calling for anyone who sees or hears about his son to contact his family.

"I am worried for his life. He needs to take his medication, otherwise he may get very aggressive and hurt people as he starts to shiver and lose his balance," he said.

Zeynos' eldest son Salim said they were continuing his medical treatment for his brother in Turkey since they took refuge in the southern border province of Hatay after fleeing from Syria's battled Idlib region one and a half years ago and where his brother went missing from.

He said his 12-member family has been mourning and praying for Osame since the day he went missing. Salim noted that the health of their aged parents is deteriorating day by day as they worry themselves to death.

"Turkey has embraced us, extending its helping hand. I am sure they will also do their best to find my brother, for the sake of humanity," he added.

Salim said they informed the Turkish authorities of his brother's disappearance and hanged his pictures on trees and walls in the city, but have received no news so far.

The civil war, which entered its fourth year last month, has claimed more than 140,000 lives, according to London-based Syrian Network for Human Rights.