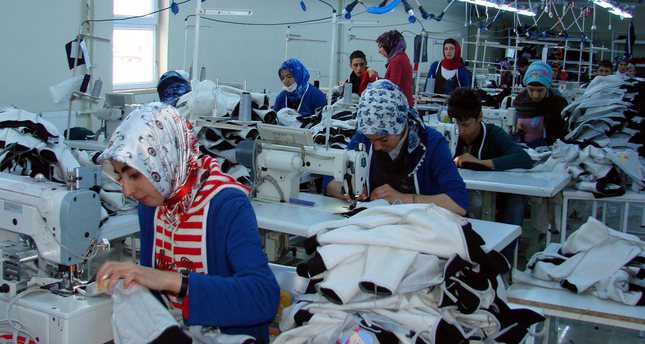 ANKARA — Turkish Minister of Family and Social Policy Ayşenur İslam said women's employment in the country has progressed over the past decade, although it is not yet at the desired level.

İslam spoke yesterday in Ankara at an international event titled "Gender Equality in the Work Force and Women's Employment."

She stated that women's employment and labor force participation saw a considerable rise in recent years. "The rate of women's employment rose to 27.1 percent from 20.8 in 2004," she said, adding that the rate was still not high enough.

Women's participation in the work force rose to 30.8 percent by the end of 2013 from 23.3 percent in 2004, in line with Turkey's economic growth in the last decade. In accordance with a nationwide development plan, the government seeks to increase those rates to at least 30.1 and 34.9, respectively, in line with projections for the coming years, and to 41 percent for labor force participation by 2023. The development plan includes steps to encourage women's employment such as affordable and quality daycare for working mothers. Although women are increasingly entering the labor market, most of them leave their jobs after giving birth due to the high cost of daycare.

İslam noted that employment was central to women's economic independence, personal empowerment and equality with their male counterparts. "Employment also boosts a woman's place in the family and her self-confidence, and reinforces her place in society," she said.

The minister said the number of women employed in executive positions was higher compared to some European countries. "Women make up 6 percent of executives while this figure is 3 percent in private companies in Europe, according to a study by the European Commission," İslam stated.

In the public sector, the percentage of high-ranking female bureaucrats in Turkey is 9.3. "But we have only one women undersecretary in the government and she works at our ministry. We want to increase this number by hiring more female bureaucrats," said İslam. Women's employment rose particularly after the government offered an employer premium to businesses hiring women and unemployed youth following the global economic crisis in 2008.
Last Update: Apr 09, 2014 1:27 am
RELATED TOPICS