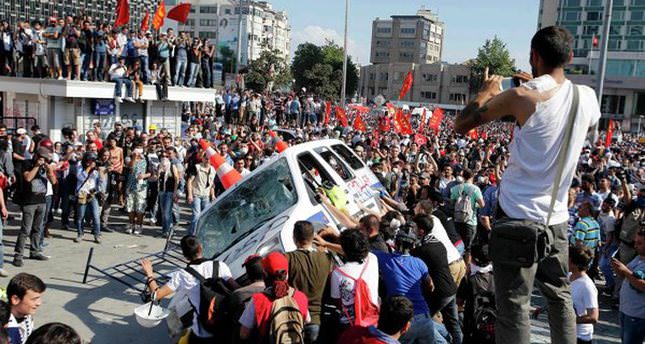 Police officers used disproportionate but legitimate force during last year's Gezi Park protests, which were characterized as "insurrection," but terrorist groups exploited the situation, according to a report prepared by the Interior Ministry

ISTANBUL — In the report, inspectors said an investigation by the Istanbul Governor Hüseyin Avni Mutlu, then police chief Hüseyin Çapkın and other senior law enforcement officials into the handling of Gezi Park protests is not necessary.

The report notes that a series of "misunderstandings" paved the way for protests to turn into violent riots. It goes on to explain that "an area of about 4 square meters [was supposed to] be removed from the park as part of a pedestrianization project for Taksim Square but unclear statements by Istanbul municipality officials on the issue led to speculation that a shopping mall would be erected after the demolition of Gezi Park."

According to the report, riot police prevented a brawl between municipality officials and protesters who set up tents in Gezi Park but protesters continued hurling stones and bottles at municipal crews. It added that police had to fire tear gas and water cannons, "sometimes excessively," against "overreacting" crowds in order to evacuate the park.

The report links the ensuing violent riots to the burning of tents by municipality officials to prevent a sit-in. "Following media reports on the burning, environmentalists flocked to the park and marginal groups taking advantage of the protests descended on the park as well," the report continued. Inspectors noted that after the involvement of "marginal groups with different agendas and ideologies ... protests turned into insurrection and an act of vandalism, and went as far as targeting the prime minister's office in the Dolmabahçe Palace."

The report notes that police did not overstep responsibility but the number of people involved and difficulty in distinguishing between peaceful protesters and violent groups posed a challenge for security forces and "police had to resort to teargas and water cannons."
The report added that the police intervention was "inadequate" in the face of the masses, and the "entangled nature" of radical and peaceful groups prevented police from making detentions.

The report noted that Taksim Square and its vicinity became the heart of an insurrection against the state and the site of demonstration by radical groups. "Despite Governor Mutlu's call to protesters to resolve the dispute through talks and other efforts, the groups went ahead with their provocative actions and this necessitated a police intervention," the report stated. It concluded that the actions of the police and governorate were justified and did not warrant an investigation since their actions "did not contravene the law."

The Gezi Park protests surfaced on May 27, 2013 as a reaction to a plan to redevelop the park next to Taksim Square. The protests, which began peacefully, reached their peak on June 1 as an anti-government street movement.

According to a report by the Foundation for Political, Economic and Social Research (SETA), 49.1 percent of demonstrators joined the protests after facing police brutality. Prior to this stage, the protest was relatively small in scale and evolved around protecting the trees and environment in Gezi Park, but the tear gas provoked many from far-left groups to join the cause. As they proceeded, anarchists and terrorist organizations such as the Revolutionary People's Liberation Party-Front (DHKP-C) got involved in the riots, attacking police and damaging public and private property.

Prosecutors filing an indictment against the protesters have charged five leaders of the Taksim Solidarity Platform, which organized the Gezi Park protests, with running a criminal gang.