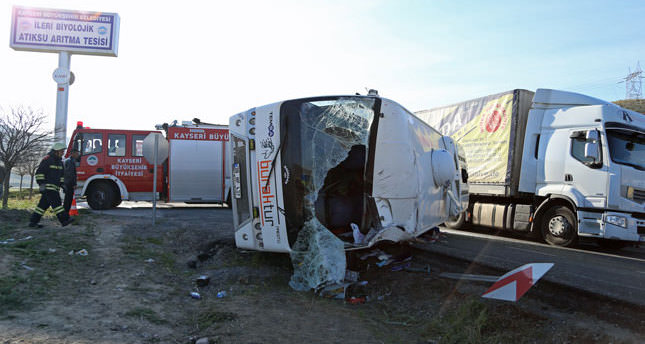 by Daily Sabah Apr 11, 2014 12:00 am
KAYSERI — A truck and two minibuses crashed into each other on a highway connecting the central Turkish province of Kayseri and the capital Ankara on Friday, injuring 27 people.

The truck ran into a minibus and that minibus crashed into another one. Injured victims were transferred to hospitals in Kayseri, one of whom remains in critical condition. The cause of the accident is not known.

Nine people were killed and 11 others were injured in another pileup in the central Turkish province of Konya, near Kayseri, on Wednesday.
Over 3,000 people were killed in traffic accidents across Turkey last year according to the statistics. The primary cause of accidents and high fatality rates is reckless driving. In particular, roads straddling the vast central region of Turkey connecting the country's east and west see a large number of deadly accidents every year due to bad weather and reckless driving. In one of the deadliest accidents in recent memory, 21 people were killed when a passenger bus crashed on an icy road and in heavy fog in Kayseri, another province in central Turkey.