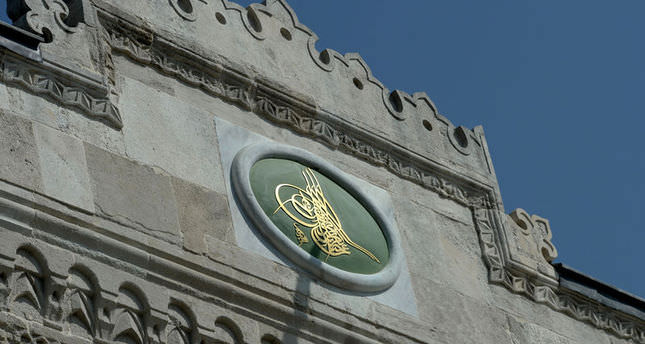 ISTANBUL — The gates of Istanbul University kept a secret for the past eight decades. The inscriptions and tughra - seal - of Sultan Abdülaziz on the gates designed as a triumphal arc were covered in 1933, but a recent campaign named "Give Back my History," initiated by the students of Istanbul University and the National Students Council, succeeded in revealing the tughra of Sultan Abdülaziz.

The gate was built similar to Paris' Arch de Triomphe upon the order of the sultan, who returned from a trip to Paris and was mesmerized by the landmark. The gate features two tower blocks and an entrance with an arch above. The middle gate was designed to allow entry for carriages, while the smaller side gates were designed for pedestrians. The tower blocks built similar to a castle were reserved for the watch guards. The interior walls of the gates also contain the sultan's seal, along with Atatürk's "Address to Youth." On the facade of the gates overlooking Beyazıt Square, the seal of Sultan Abdülaziz was engraved and written in bronze below the Istanbul University logo.

After the campaign, a sign bearing the words "Turkiye Cumhuriyeti" (Republic of Turkey) covering the tughra was relocated and the seal is now visible. The fourth Cultural and Natural Heritage Preservation Board of Istanbul passed a decree in 2007 for the removal of the marble medallions placed on the seal and ordered the university to determine to whom the seal belonged and its condition. After the start of the restoration, the sultan's seal was immediately revealed and with the decision of the Preservation Board, the seal hidden from sight for years is now visible to visitors. The gate recently has been restored, the facade cleaned and the stones chemically reinforced.