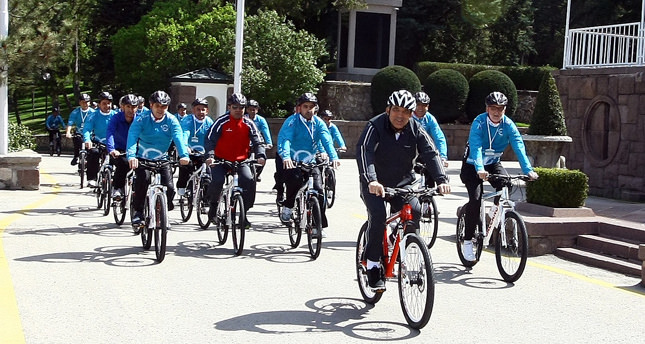 by AA
Apr 12, 2014 12:00 am
ANKARA — Turkey's president said Friday that he had not broken a sweat during the "Presidential Cycling Tour" promotion at Ankara's Çankaya Palace.

The seven-day bicycle tour along Turkey's beautiful Aegean and Mediterranean coasts and famous cities "will be aired live on TV across 130 countries through the cooperation of TRT and EuroSport," Abdullah Gül told journalists after a bicycle stroll around the palace. "I can't think of anything better for promoting Turkey."

Gül won the race on the 750-meter course after a head start that made the other contenders bite the dust.

Expressing pride in hosting the 50th Presidential Cycling Tour between April 27 and May 4, Gül said bicycling is a healthy lifestyle.

When a journalist asked him if he were a "sweating president," a Turkish term referring to nervous lawmakers, Gül responded, "I probably did not break a sweat today. You know whether I did or not."

Meanwhile, UCI's head said the tour in Turkey follows the famous tours in France, Italy and Spain in terms of importance.

"This is an event which follows the world's top three bicycle tours in importance… The most qualified athletes in the history of this tour will participate this year," Brian Cookson told journalists.

Turkey's Presidential Cycling Tour will be held in eight stages starting from Alanya and proceeding along the Mediterranean and Aegean coasts before ending in Istanbul.

The world's sole "transcontinental cycling tour" will witness the high-level competition of world-renowned athletes and teams with the slogan of "50-Year Passion of Cycling."