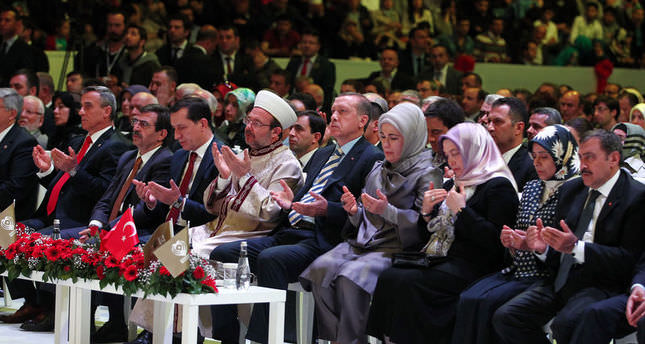 A week dedicated to mark the sacred birth of the Muslim community's beloved Prophet Muhammad started on April 12 with a program in Turkey's capital, Ankara, along with various other celebrations all around the country including Istanbul, Ankara, Bursa, Edirne, Gaziantep, Hatay, Konya and Şanlıurfa.

The theme of this year's celebrations is "Prophet Muhammad, Religion and Sincerity," which focuses on the significance of sincerity in religion. The Ministry of Culture and Tourism has organized various exhibitions, conferences, discussions and Sufi music concerts as part of the festivities. "Sincerity is not only needed regarding religious duties, but is significant in all human relationships," Director of Religious Affairs Mehmet Görmez said in this year's themed book on Prophet Muhammad.

Turkey's Religious Affairs Directorate will organize a series of activities during the week in different provinces of Turkey, which are all aimed at better introducing and acquainting people with Prophet Muhammad.

In this respect, starting on April 15, the exhibition "The Topkapı Palace: Traces of Prophet Muhammad," featuring photographs of holy relics, will be on display in various cities such as Bursa, Edirne, Gaziantep and Konya.

Art lovers can take a tour at the exhibition, "Love of the Prophet: Prophet at his birth's 1443th Anniversary," which will feature numerous holy relics, hand-written Qurans and fabrics depicting religious stories.

As a part of the Sacred Birth Week, the Topkapı Palace is hosting conferences and panels focusing on the subject of the Ottomans' love for the Prophet and the tradition of the mawlid honoring Prophet Muhammad's birth. Visitors will also be offered the chance to listen to different compositions of renowned sultans and palace composers.

In addition, Ankara's Ethnography Museum will introduce Quranic manuscripts and holy cases on April 15. The Turkish-Islamic Arts Museum will host a conference in cooperation with the Department of Religious Studies at the Uludağ University in Bursa. Gaziantep's Zeugma Mosaic Museum will host a Quranic recitation event on April 15, followed by a conference on "The Model Human: Prophet Muhammad." On April 17, the performers of the Ministry of Culture and Tourism Fine Arts Directorate will take the stage at "Sufi Music Concert."

The Mevlana Museum, located in Konya will be open for visitors until 11:00 p.m. throughout the week.

An exhibition featuring the "Hilye-i Şerif " (The Noble Description) has been organized by the Karatay Madrasah's China Art Museum.
Prime Minister Recep Tayyip Erdoğan, speaking at the Sinan Erdem Sports Hall in Istanbul during the celebrations marking Prophet Muhammad's birth, said he remembered those who have inspired Muslims for the past 1,400 years with gratitude.

Emphasizing that faith begins in the heart, he said, " The heart is not just an organ or a piece of meat. It carries a person's reason for existence. It's sometimes the center of hate. It is the ruler of the physical being."

The prime minister said God knew what was in people's hearts and nothing could be kept hidden. "Those whose hearts are filled with hostility can never be credible, no matter what they say.

Those who are slaves to anyone but God lose. Those who try to find evidence outside of the Quran have deviated. Religion cannot be a tool in the hands of the state, politics nor of those who have fallen victim to their ambitions," Erdoğan noted.

Prime Minister Erdoğan also said that he rejected the abuse of the relationship between the state and religion and that sincerity was of paramount importance.

Turkish President Abdullah Gül attended Saturday's program at Ankara Arena Sports Hall that included a recitation of the holy Quran, retelling the life of the last prophet and prayers. During his speech, Gül remarked, "Today we commemorate the 1443th birthday of God's messenger Prophet Muhammad who significantly influenced the history of humanity and enlightened people with his model life."
RELATED TOPICS