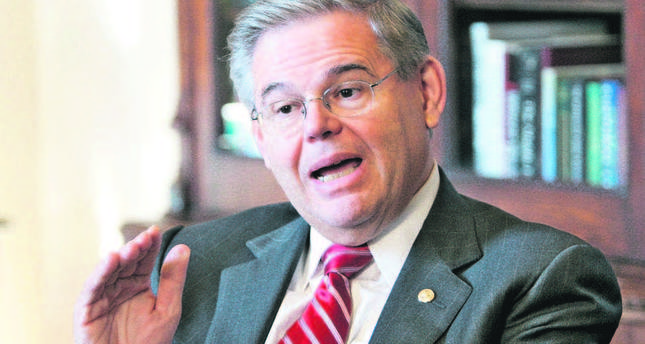 The Gülen Movement has made donations to Robert Menendez, a U.S. Senator from the state of New Jersey known for spearheading efforts for the United States' official recognition of the so-called Armenian genocide

ISTANBUL — The movement made donations totaling $10,000 to Menendez between 2011 and 2012, though this is merely an official figure shown in receipts.

The donations are funneled through schools and companies affiliated with the Gülen Movement such as the Milkway Education Center that donated $1,000 (TL 2,113) to Menendez in 2011, Pioneer Academy of Science that donated $3,000, Kulen Law Firm that donated $4,000 in 2011 and 2012 as well as Umit International, a hardware and software company, that donated $2,000 in 2012.

The movement is known to have donated about $1.5 million to dozens of U.S. politicians over the years, particularly those known for their hostile views toward Turkey including Texas Governor Rick Perry. Perry claimed in 2012 that Turkey was "a country ruled by what many would perceive to be Islamic terrorists" and should be expelled from NATO.

Senator Robert Menendez, a Democrat, is one of the authors of a resolution sent to the U.S. Senate Foreign Relations Committee earlier this week. The resolution called recognition of the mass deaths of Armenians in the Ottoman Empire in 1915 a "genocide."

The resolution did not make it onto the agenda of the Senate and was shelved before the Senate went into the Easter recess.

As he introduced the resolution, Menendez has said that "genocide" was "a horrifying reality that can never be denied," and called for recognition, teaching and commemoration of the event. The resolution calls on the president "to work toward an equitable, constructive, stable, and durable Armenian-Turkish relationship that includes the full acknowledgment by the Turkish government of the facts about the "Armenian Genocide."

Similar resolutions have been brought to the Senate Foreign Relations Committee in the past and were not passed by the senate.

The Armenian diaspora in the U.S. has argued that the Turkish government should recognize the events of 1915 as a "genocide," while Ankara rejects such charges.

Earlier this week, Menendez was among the guests during a reception at the Turkish American Union, which is known for its ties to Gülenists.

The "genocide issue" is one of the red lines that Turkey has, for normalizing ties with Armenia. For decades, Turkey has adopted a state policy of denying the genocide and attributing the mass deaths of Armenians during their forced deportation in World War I to diseases and isolated cases of attacks.

Turkey insists the issue of "genocide" should be handled by historians while Armenia demands recognition in order to advance relations between the two neighboring countries.

The Gülen Movement, which claims it is strictly a network of charities promoting interfaith friendship and a religious congregation, increasingly became politicized, particularly after last year's Dec. 17 probe aiming to discredit the Turkish government.

The government accuses Gülenists of establishing "a parallel state" within many government and state organs such as police and judiciary to serve for the interests of the movement.
RELATED TOPICS