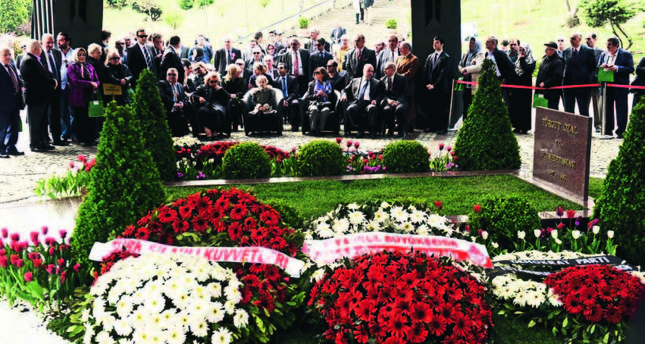 LATE President and Prime Minister Turgut Özal was commemorated on the 23rd anniversary of his death in a ceremony in Istanbul. Since his death, there have been unconfirmed rumors about his possible assassination

ISTANBUL — Turgut Özal, the eighth president of the Republic of Turkey, was commemorated yesterday on the 21st anniversary of his death.

A eulogy was delivered at the solemn ceremony. Speaking at the ceremony, the late president's son, Ahmet Özal, said the grief of the public and his family was "still fresh." He also spoke about the suspicions over his father's death. An investigation was launched over allegations that Özal was poisoned.

"There is a lawsuit underway. There were reports that the coroner's examination was modified in order to erase the findings that he was in fact poisoned. The examination report had missing parts and we are aware that staff at the coroner's office were threatened. These are the facts we have and we hope the truth will be revealed one day," Özal said.

President Abdullah Gül issued a written statement on the occasion of the anniversary. "Turgut Özal was a leader admired by the public and did a valuable service to this country. He was behind reforms that led to Turkey's development in terms of democracy, freedoms and economy," Gül said.

Özal died of a heart attack on April 17, 1993 while in office. Last year, an investigation was launched into his death following claims by his family that the president was victim of poisoning. Reports did not find any wrongdoing in his death, though the investigation process continues. Some media outlets linked to the controversial Gülen Movement claimed that traces of poison were found in Özal's body.

Born in 1927 to a Kurdish family, Özal, an electrical engineer, worked as a bureaucrat and later as an executive in the private sector. In the post-coup government of 1980, he was deputy prime minister in charge of economy but resigned in 1982. The founder of the Motherland Party, Özal won the 1983 elections and became prime minister. In 1989, he was elected president.