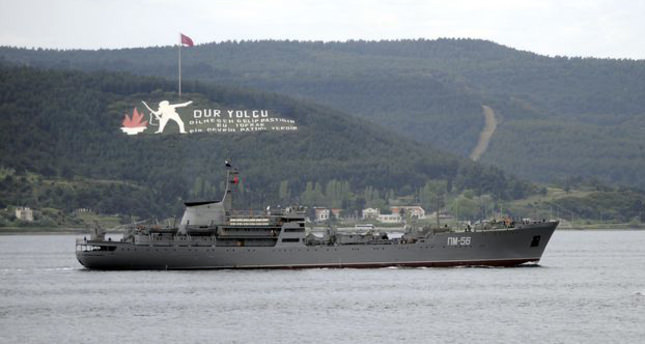 by AA
Apr 20, 2014 12:00 am
ISTANBUL — A Russian warship passed Sunday through Turkey's Çanakkale (Dardanelles) strait, possibly to the Black sea. The navy ship, named 'PM 56,' was being accompanied by Turkish coast guard boats during its crossing.

The vessel was apparently heading towards the Marmara Sea, but no information has been acquired as to its final destination.

Tension rose up in the Black Sea basin after Russia annexed Ukraine's Crimea last month following a controversial referendum on the peninsula.

Ukraine's mostly Russian-speaking east appears as the current flashpoint of the ongoing conflict between Russia and the West over Kiev's allegiances. The West has repeatedly accused Moscow of planning an invasion of Ukraine.