Ukraine crisis: At least one killed in gunfight 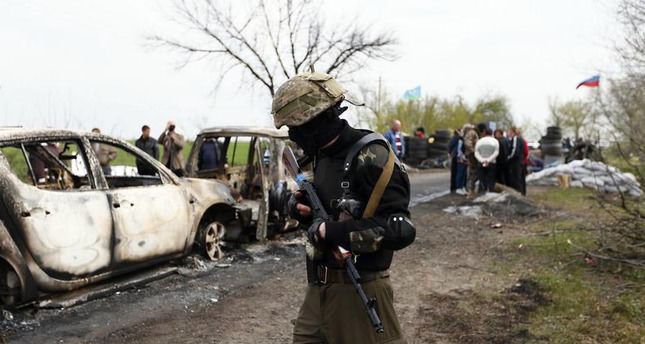 by Anadolu Agency
Apr 20, 2014 12:00 am
KIEV — Gunfire erupted near a makeshift checkpoint manned by pro-Russian separatists near Slaviansk in eastern Ukraine early on Sunday April 20, killing at least one.

The incident represented the first fatalities in eastern Ukraine since a four-way agreement was reached last Friday in Geneva to de-escalate the situation in eastern Ukraine where separatists are rebelling against Kiev's pro-western leaders.

Though police on the interior ministry website said one person was killed and three others received gunshot wounds in the incident involving "two groups of civilians", Reuters witnesses at the scene saw two dead bodies in a truck.

A separatist fighter put the death tally higher, saying the attackers - whom he said were Ukrainian ultra-nationalists - killed one separatist immediately and two others in ensuing shooting after arriving in cars at the checkpoint and opening fire.