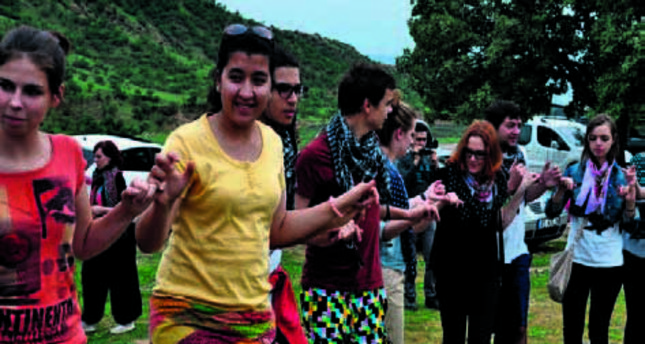 As part of a joint program between the Silopi local administration and the EU, 35 foreign university students joined local youngsters to dance at Cudi Mountain, which once was synonymous with PKK terrorism

ŞIRNAK — Silopi a town in the southeastern Turkish province of Şırnak, hosted foreign students as part of a project to promote the region in the wake of the reconciliation process with the Kurds. Silopi's local administration organized the trip for 35 university students from Poland, Tunisia, Georgia, Italy and Ukraine.

Students attended a picnic on the outskirts of Cudi Mountain, which used to be a hideaway of terrorists from the PKK.

Nata Masechko, a Ukrainian student, said she visited Turkey twice before but it was the first time she visited the region. "I looked up information about the region before I came here and all search results were about the clashes, terrorism," she said. "But when I arrived here, I saw it was not the case. This place is nothing like the media made us believe. People here are very hospitable. We have a wholly different culture; yet, they accepted us and hosted us at their homes." Masechko said what she saw assured her the reconciliation process was on track.

Cudi has seen air raids and military operations in past years and played host to terrorists hiding out in its rugged terrain.

Şırnak, along with other cities in Turkey's east and southeast, has long been beset by terrorism and clashes between Turkish security forces and the PKK, a terrorist organization. Last year, the Turkish government initiated a reconciliation process in a series of reforms to end the long-standing conflict with the Kurds. The process was followed by PKK's announcement of its withdrawal from beyond the Turkish border. Since then, with virtually no significant terror attacks, the region revels in an atmosphere of peace.
Last Update: Apr 21, 2014 10:48 pm