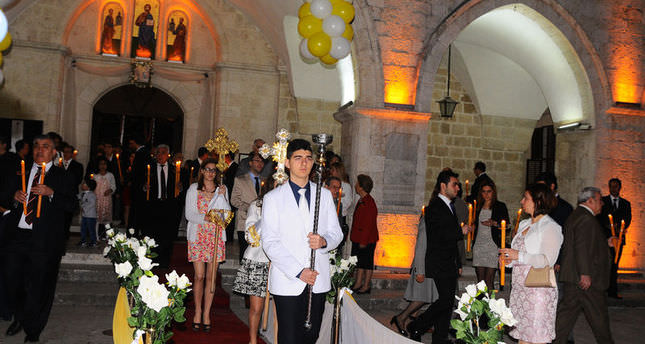 by daily sabah
Apr 21, 2014 12:00 am
ISTANBUL — Easter, one of the main holidays in the Christian world, was celebrated yesterday across Turkey and Northern Cyprus.
Turkish Prime Minister Recep Tayyip Erdoğan also marked the occasion with a message of "peace and unity," by wishing all Christian communities a happy Easter.

A feast held to commemorate the resurrection of Jesus Christ for Western Christianity and all Eastern Orthodox Churches, Easter this year is being celebrated on the same day by both the Orthodox and Catholic Churches.

Hatay's Orthodox Church celebrated Easter with a mass lead by the spiritual leader of the Orthodox Church Jan Dellüler and Dimitri Doğum and the head of Antakya Orthodox Church Foundation, Fadi Hurigil. After mass, the celebrations continued in the garden, where worshipers gathered to light candles and sing hymns.

Christians in İskenderun also celebrated Easter in three different churches including the Karusan Manuk Church, known as an Armenian Church, as well as Orthodox and Catholic churches. The Mayor of İskenderun, Seyfi Dingil also attended the celebrations and listened to an Easter address from the Orthodox community leader, Can Teymur.

The Northern Cyprus city of Famagusta (Gazimagusa) was also the scene of a display of tolerance, friendship and peace. More than 3,000 Greek Cypriots gathered for the Good Friday mass at the Nestorian Church situated in Suriçi, Northern Cyprus.

During a speech at a Good Friday mass, Kayalp said that Sunday would be a symbolic day as for the first time in 58 years Easter celebrations would be held at Nestorian Church. He further said that their principal aim was to show tolerance between North and South Cyprus even if there are cultural differences.

Famagusta's Greek Cypriot Mayor Alexis Galanos said that while there has not been any religious tension between Turkish and Greek Cypriots until now, "Christians and Muslim should know how to live together."

Prime Minister Recep Tayyip Erdoğan wished the Christian community in Turkey a happy Easter and noted that the religious festivals are special days of happiness and joy during which people remember and cherish importance of values such as solidarity, helping each other and sharing.

"Easter is the religious festival of Christian societies. I am sending well wishes to our Christian citizens with whom we are sharing happiness and sorrow for many centuries. As the representatives of a civilization based on love, respect and tolerance toward humanity, we are against all types of discrimination and consider such differences to be cultural diversity. I [would like to wish a happy] Easter to all Christians and in particular our Christian citizens under different religious churches and communities with my deepest respect."